CAR-T cell immunotherapy has become the hope of mankind to fight cancer, especially the world-renowned achievements in the treatment of hematological tumors. However, little is known about the long-term potential and clonal stability of infused cells.

In 2010, two blood cancer patients became the first participants in an ongoing clinical trial of CAR-T cell therapy at the Perelman School of Medicine at the University of Pennsylvania, and their cancers achieved complete remission that year.

The results showed that CAR-T cells were still detectable 10 years after infusion into the patient’s body.

The infused CAR-T cells evolved over time, resulting in the emergence and predominance of highly activated CD4+ cell populations in both patients, which continued to exhibit tumor cell-killing properties. This is the longest-duration CAR-T cell therapy recorded to date for chronic lymphocytic leukemia. 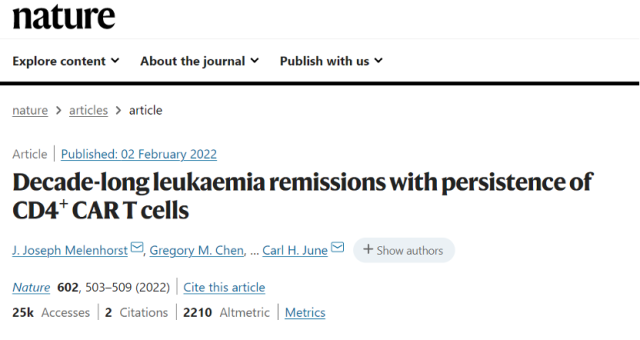 More than 10 years after CAR-T cell therapy, two patients are still in remission with no detectable signs of leukemia. CAR-T cells were detected across time points by flow cytometry, and quantitative PCR confirmed the presence of CTL019 (CAR-T cells targeting CD19) at all time points in both patients.

The most recent blood test of two patients showed that CTL019 cells were still detectable in the blood of both patients after 10 years (Figure 2), accounting for 0.8% and 0.1% of all T cells, respectively, while CD19+ B cells and CLL cells It remains undetected or highly suppressed (less than 1%).

In contrast, the clonal composition of patient 2 gradually shifted in the first two years and was generally more stable. The LVIS data showed substantial agreement with the clonal transition observed in the TCR-seq data. 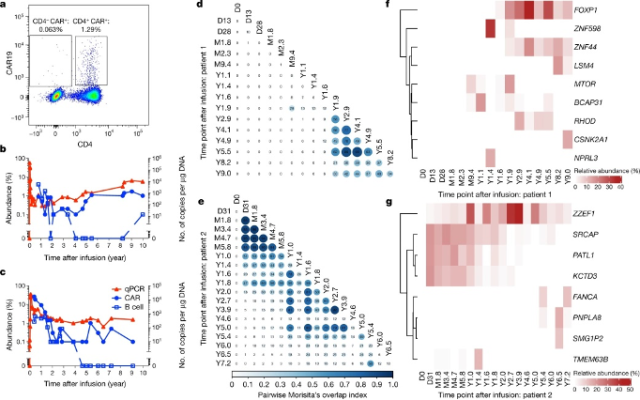 The researchers developed a panel of 40 antibodies to analyze the phenotype of CAR-T cells at multiple time points using mass cytometry (CyTOF) (Figure 3).

The data showed that CD8+ cells accounted for 29.3% of CAR-T cells in patient 1 at 1.8 months after receiving CAR-T cell therapy, and decreased proportionally at subsequent time points.

The researchers further studied and found that in the two patients, the response to CAR-T cell therapy was mainly divided into two phases: the initial response phase represented by CD8+ T cells and CD4-CD8- Helioshi CAR-T cells, and the proliferative phase.

Long-term remission dominated by the phenotype of CD4+ CAR-T cells with sexual and cytolytic functions. 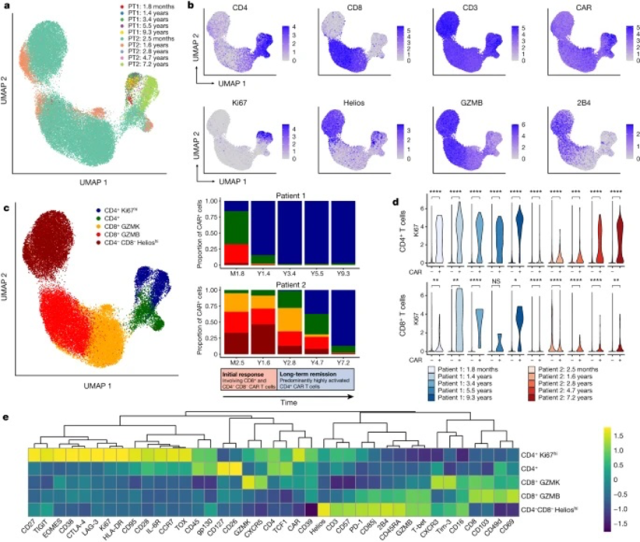 Through a series of subsequent related experiments, the researchers found that both patients developed a highly activated CD4+ population that dominated the CAR-T cell population at later time points.

This transition is reflected in the stabilization of the clonal composition of CAR-T cells, with the clonal lineage dominated by a few clones. Single-cell analysis revealed that these long-lived CD4+ CAR-T cells exhibited cytotoxic characteristics while sustaining functional activation and proliferation.

As one of the authors of the study, Dr. Carl June, the father of CAR-T, said, “In the next 10 years, it will also be possible to detect the infusion of CAR-T cells that can kill cancer cells at that time, which is very exciting!

We can It was concluded that CAR-T cell therapy can indeed cure leukemia patients.” In conclusion, this study details the decade-long cellular changes, functions, and molecular characteristics of CD19-targeted CAR-T cells in two patients.