Nature Biotechnology: CAR-T can be produced in the body in one day

Nature Biotechnology: CAR-T can be produced in the body in one day, engineered implants make CAR-T faster and more effective.

Immune cell therapy such as CAR-T is generally regarded as the fifth cancer treatment after surgery, traditional chemotherapy, radiotherapy, and targeted therapy. Taking CAR-T as an example, a total of 7 CAR-T therapies have been approved for marketing globally, and 2 products are listed in China, all of which are autologous products.

It has become a consensus in the field to shorten the preparation time, reduce the cost, and further increase the accessibility of cell therapies such as CAR-T.

Recently, researchers from North Carolina State University and the University of North Carolina at Chapel Hill published a research paper titled: Bioinstructive implantable scaffolds for rapid in vivo manufacture and release of CAR-T cells in the journal Nature Biotechnology .

Said to have developed an implant called MASTER (Multifunctional Alginate Scaffold for T Cell Engineering and Release, for T cell modification and release of multifunctional alginate scaffold implants) , which can rapidly produce and release CAR in vivo -T cells and reduce the time to manufacture CAR-T to 1 day.

The research team further confirmed the effect of the method in a mouse lymphoma xenograft model: CAR-T cells generated in vivo entered the blood circulation and controlled the growth of distant tumors, showing stronger persistence than traditional CAR-T.

“Due to the high cost, the accessibility of CAR-T therapy is still limited. One of the reasons for the high cost of CAR-T cell therapy is that the manufacturing process is complex, time-consuming and requires customization.

Yevgeny Brudno, Ph.D. , is an assistant professor in the Department of Biomedical Engineering at the University of North Carolina at Chapel Hill. Currently, his research focuses on the use of chemistry, drug delivery, biomaterials and nanomedicine technologies to deeply understand the physiological response of diseases and provide new ideas for disease treatment.

Pritha Agarwalla, the first author of the paper and a postdoctoral researcher, said that for patients, shortening the CAR-T manufacturing time is even more critical.

CAR-T can be produced in the body within 1 day, and it is more effective against cancer

In the paper, the core of the rapid generation of CAR-T is derived from the MASTER implant.

It’s a sponge-like biocompatible material that looks and feels like a mini marshmallow. The implant is similar to a large container for the manufacture of CAR-T. After implantation, the implant can rapidly produce and expand CAR-T cells in the body.

To understand how the MASTER implant works, it is first necessary to review the CAR-T cell production process.

The main steps in the production of CAR-T cells include isolation and enrichment of T cells from peripheral blood, activation of T cells with antibodies, followed by introduction of CAR-expressing genes into T cells using viral or non-viral vectors, and reprogramming of T cells into viable cells.

CAR-T targeting cancer cells, in vitro expansion of CAR-T, cryopreservation, and finally infusion into the body.

Generally speaking, the entire manufacturing cycle of CAR-T is 2 to 4 weeks, and the normal process of manufacturing steps such as T cell activation, CAR virus transduction and in vitro expansion usually takes 9 days. 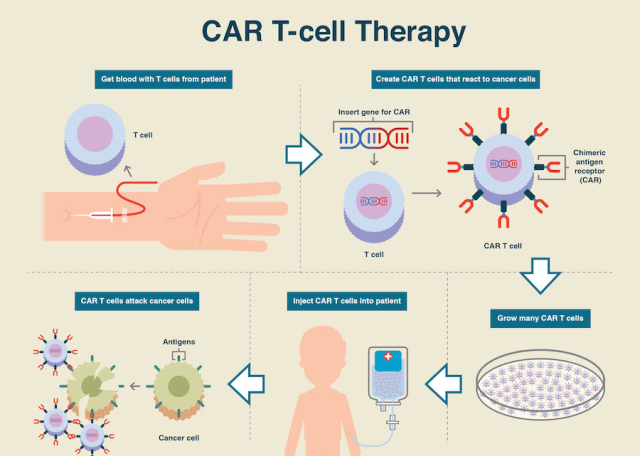 “MASTER technology integrates the steps of T cell activation, reprogramming, and expansion in vivo, which can significantly shorten the preparation time. These steps are expected to be completed within 1 day , ” said Pritha Agarwalla .

Specifically, the production process of CAR-T cells using MASTER implants can be divided into the following steps.

The researchers isolated T cells from the body, mixed the unactivated T cells with a viral vector encapsulating the CAR gene, and poured the mixture onto the MASTER implant. The implants are formulated with antibodies that activate T cells, and when the mixture is poured on top, the process of activating the T cells begins. At the same time, the team surgically implanted MASTER into mice;

After MASTER was implanted in mice, the T cells remained active, and the modified virus then transferred the CAR gene into the T cells and reprogrammed them into CAR-T cells.

In the official press release, Pritha Agarwalla pointed out that the large pores and spongy nature of MASTER material will make the viral vector and cells tightly bound together, which accelerates the reprogramming of T cells.

The researchers pointed out that in the trial, compared with traditional CAR-T, CAR-T cells produced by MASTER technology showed better therapeutic effect.

Yevgeny Brudno explained that it usually takes at least two weeks from unactivated T cells to ready CAR-T cells, and we were able to implant MASTER in vivo within hours of isolating unactivated T cells, while T cell activation, reprogramming and CAR-T amplification.

The manuscript also pointed out that cells produced using MASTER technology are less differentiated, have higher anti-cancer efficacy in vivo, and last longer. In the long run, if the mice relapsed with lymphoma again, the anti-cancer effect was obvious.

In the above mouse experiments, CAR-T cells produced by MASTER technology had better anti-tumor effect. In theory, this “upgraded” CAR-T cell also has a certain transformation potential.

Yevgeny Brudno believes that this approach will be cheaper and cheaper than existing CAR-T therapies.

Out of optimism about MASTER technology, Yevgeny Brudno also has plans to transform, and he revealed that he is commercializing the technology with industry partners. “We are also exploring opportunities to collaborate with other industry partners to apply the basic concepts of MASTER to more areas such as autoimmune diseases and regenerative medicine ,” he continued.

However, Yevgeny Brudno also admitted that there is still a lot of work to be done in the real clinical application .

First, the team also needs to validate the safety and efficacy of MASTER technology in multiple animal models before advancing to clinical studies. For example, does the MASTER implant trigger an immune response in the body.

In addition, the MASTER implant needs to be implanted into the body through surgery. There will be a certain wound in the operation, and the recovery of the wound and the degree of damage also need to be evaluated.

On the other hand, whether the clinical cost of CAR-T cells produced by MASTER technology can save costs after the final approval, and how much the cost can be saved is still unknown.

In terms of therapeutic indications, Yevgeny Brudno also acknowledged that MASTER technology has great therapeutic prospects in hematological tumors, but how effective it is in solid tumors (including pancreatic cancer and brain tumors) remains to be confirmed by more data.

Overall, there are endless ways to develop CAR-T cells with lower cost and shorter production cycle. For example, a research team reported that CAR-T can be directly generated in vivo by injecting mRNA.

Sana and other companies have used liposomes to directly deliver CAR gene fragments to T cells, and use the body as a bioreactor to generate CAR-T and CAR-NK. , CAR-M, etc.

It is worth mentioning that a few days ago, researchers at the University of Pennsylvania reported a method for generating functional CAR-T cells from T cells extracted from peripheral blood within 24 hours in Nature Biomedical Engineering Activation of T cells and in vitro expansion.

Nature Biotechnology: CAR-T can be produced in the body in one day