More prone to social anxiety after growing up if sleeping less in childhood?

Sleep takes up almost a third of your life. It is conceivable that adequate sleep must be of great significance to life.

Not getting enough sleep can sometimes quickly manifest problems, such as headaches, fatigue, and difficulty concentrating.

If you lack sleep for a long time, many physiological indicators will also light up red lights, which are closely related to the increased risk of a series of diseases such as obesity, dementia, and cancer.

However, there are some effects of sleep deprivation that may be less obvious, but can quietly affect life years later.

You may not think that social barriers in adulthood may also be the hidden dangers of lack of sleep in adolescence.

How long a person needs to sleep each day shows significant changes with age: in infancy, most of the day is spent sleeping; with continuous growth and development, our need for sleep continues to decrease until In adulthood, sleep duration usually stabilizes at 7-8 hours per day.

“Compared to the function of sleep in adults, we still know very little about the role of sleep in development,” said lead author Wenjie Bian, Ph.D., of Stanford University, “especially in adolescence. Sleep may play a special role in adolescent development.”

To answer how sleep during adolescence specifically affects brain function, the researchers designed a set of experiments in which mice were given 4 hours less sleep each day for 5 days during their teenage years (35 to 42 days after birth).

As a result, as adults, the mice displayed abnormal social behaviors compared with the control group of normally sleeping mice.

Under normal circumstances, just like young adults who have just entered the social field, they are naturally curious about unfamiliar mice.

Rats are more interested and will actively socialize with them. However, the mice that experienced sleep disturbance in their teens lost a strong interest in socializing with stranger mice.

In the researchers’ scientific terms, they lost their preference for social novelty. 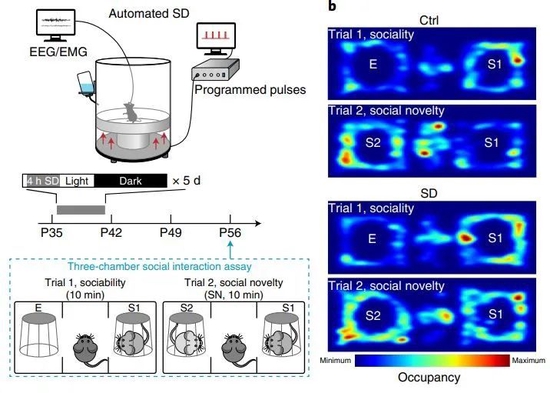 When the researchers performed the same sleep disturbance in the mice at a slightly older age (42 to 49 days after birth), they found a similar loss of preference, but the effect was less pronounced.

Later, in adulthood, the same level of sleep deprivation did not cause changes in social behavior.

These results suggest that sleep during adolescence has a special function for later social behavior.

So why is sleep in adolescence so special? After further probing the changes at the level of neural circuits, the researchers found that dopaminergic neurons in the ventral tegmental area (VTA) of the midbrain play an important role in this process.

Specifically, the dopaminergic neurons of the VTA and their nerve fibers projecting the nucleus accumbens (NAc) and prefrontal cortex (PFC) make up the midbrain-cortical/limbic system pathways that play a role in motivation, addiction, and reward-related behaviors For social animals—whether humans or mice, social stimuli are generally considered to be a “reward”, so VTA also regulates social behavior.

Using cutting-edge optical fiber recording technology (fiber photometry), combined with a novel dopamine fluorescent probe (GRABDA sensor) and other methods, the researchers recorded in real time the electrical activity of VTA dopaminergic neurons in the brain of mice while they were socializing. , and directly monitor dopamine release.

The results consistently showed that when the mice in the control group first met an unfamiliar partner, both the neuronal response of the VTA and the release of dopamine in the NAc had the greatest response; with the increase of familiarity, the neural response gradually decreased; The social stimuli—new, unfamiliar mice—received sharp responses.

But in teenage sleep-deprived mice, this pattern of neural responses disappeared! Neither VTA neurons nor NAc dopamine release responded to the new, unfamiliar mice.

The system cannot respond in a timely and effective manner to emerging social stimuli.

Subsequent studies pointed out that VTA dopamine neurons have different states in different stages of sleep, and the normal sleep/wake cycle in adolescence helps to maintain the excitability level of VTA neurons within a reasonable range, preventing its development during development. In the process of being overexcited, normal dopaminergic circuit systems and social behaviors are formed.

The study also explored the possibility that increased sleep during adolescence could improve social behavioral disorders in adulthood. “In a variety of neurodevelopmental disorders, such as autism and schizophrenia, the proportion of sleep disorders is as high as 50% to 80%, especially in adolescent patients.

More studies have found that in autistic patients, sleep disorders are associated with There was a significant positive correlation with the severity of social impairment,” the researchers noted.

Using a mouse model with a genetic mutation that causes autism, the researchers found that drugs that increase non-rapid eye movement (NREM) sleep in adolescence or optogenetically selectively increase the slow-wave component of the cortex (a component of NREM sleep) One of the important features), or inhibiting the electrical activity level of the VTA by chemical genetics, can greatly improve the social impairment of these autistic mice, so that they no longer show “social fear” when facing unfamiliar peers in adulthood , but exhibit relatively normal social novelty preferences.

“Our findings reveal a novel function and circuit mechanism of sleep in brain development during adolescence, extending our understanding of sleep and social behavior,” said Dr. Wenjie Bian. For adolescents who are in the stage of continuous physical development, personality and various behavioral habits, it may be particularly important to ensure adequate and high-quality sleep every day; for those who are unfortunately suffering from neurodevelopmental diseases such as autism and schizophrenia, maybe we can Another way of thinking is to try to improve their quality of life by improving sleep to alleviate or prevent the symptoms of social impairment that may worsen in the future.”

More prone to social anxiety after growing up if sleeping less in childhood?