Compared with B-cell malignancies, only limited clinical responses can be achieved with first-line cancer therapy modalities, including chemotherapy , in patients with T-cell malignancies , resulting in a poor prognosis for such patients.

CD3 is a Pan-T surface antigen that forms a complex with TCR, recognizes the target antigen and leads to T cell activation.

The presence of CD3 on all mature T cells makes this antigen a favorable target for immunotherapy of T-cell malignancies.

However, the use of CD3 as a CAR-T therapeutic target for T-cell malignancies may lead to adverse effects due to cannibalism. 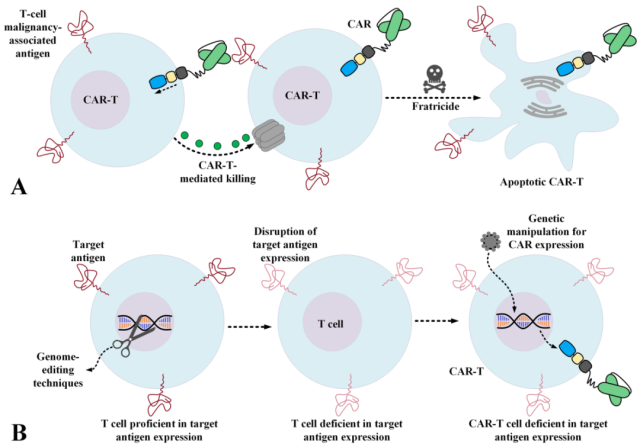 Therefore, attempts to generate anti-cannibalistic CAR-T cells or to use other types of effector cells, such as NK cells, may eliminate the above problems to some extent.

In addition, other researchers have designed third-generation CD3-targeting CARs and expressed them in the NK cell line NK-92.

CD5 is a transmembrane glycoprotein that plays a role in the survival of human lymphocytes and is a cellular component that negatively regulates TCR signaling.

Normal expression of CD5 was observed only in thymocytes, peripheral T lymphocytes, and a subset of B lymphocytes called B-1a cells.

Aberrant expression of CD5 has been detected in several T-cell malignancies including T-ALL and PTCL.

We also expressed third-generation CARs in the NK-92 cell line and demonstrated that, in addition to stable expansion in vitro, these CAR-NKs mediated specificity for human T-ALL, PTCL, and primary CD5+ cells and significant tumoricidal activity.

In addition, tumoricidal activity can be significantly enhanced using the co-stimulatory domains of 4-1BB or 2B4.

CD7 is a transmembrane glycoprotein from the Ig superfamily, normally expressed on NK cells and T lymphocytes. Studies have shown that a high proportion of T-ALL and T-cell lymphomas overexpress CD7.

However, the production of CAR-T targeting CD7 has been problematic because T cells themselves express CD7, which can lead to cannibalism and the expansion of destructive CAR-T products.

In 2017, Gomes Silva and colleagues used CRISPR-Cas9 to disrupt CD7 expression in T cells, which were then converted into CAR-Ts, an approach that not only did not have any negative impact on the tumoricidal function of these CAR-Ts, but also improved their amplification efficiency.

These CAR-Ts have unique antitumor activity against various CD7-expressing cell lines and T-ALL.

In the first-in-human clinical trial of CD7-targeted CAR-T ( NCT04004637 ), the researchers used CD7-specific nanobodies as the targeting domain of CAR-T, in addition, they used smart technology by retaining the antigen in the endoplasmic reticulum and and/or in the Golgi apparatus to prevent CD7 surface expression and subsequent cannibalism.

However, variable levels of cytokine release syndrome ( CRS ) as well as elevated levels of IL-6 were observed in all patients .

Other clinical trials ( NCT04033302 and NCT03690011 ) are also testing the applicability and efficacy of CD7-targeted CAR-T in various types of T-cell malignancies.

CD1a is a cell surface antigen present on cortical T-ALL cells, and specific expression of this antigen is also observed in developing cortical thymocytes.

This property of CD1a makes it a suitable target antigen whose targeting minimizes the potential for on-target non-tumor toxicity.

A team of researchers explored CD1a-targeting CAR-Ts, which showed that, in addition to being cannibalistic resistance, these CAR-Ts were effective against CD1a-expressing T-ALL cell lines and primary cells from cortical T-ALL samples.

In an in vivo xenograft model, such CD4-targeting CAR-NKs mediate potent antitumor activity against malignant cells and prolong survival.

However, some researchers have pointed out that in T-cell malignancies, CAR-mediated CD4 targeting may contribute to T-cell aplasia and subsequent HIV/AIDS-like syndromes.

In this regard, Ma et al. used alemtuzumab, a CD52 mAb , as a natural safety switch to eliminate CD4-targeted CAR-T after administration to prevent T-cell aplasia.

However, the safety and efficacy of CD4-targeted CAR-T in the treatment of T-cell malignancies have not been confirmed in clinical trials, some of which have been initiated ( NCT03829540 ).

CD30, also known as TNFRSF8, is expressed after T cells and B cells receive activating signals stimulated by target antigens.

No CAR-T-related toxicity was reported in the study, and in addition, among the 7 HL patients in this study, there were 2 CRs ( one lasting more than 2.5 years and the other about 2 years ) and 3 SDs.

In addition, one of the 2 ALCL patients experienced a CR lasting 9 months. In the same year, a report from another clinical trial ( NCT02259556 ) involving 18 patients with progressive R/R HL showed that only 2 patients experienced severe toxicity and the remaining patients were well tolerated by CAR-T infusion.

In terms of efficacy, 7 patients were in partial response and 6 patients had stable disease.

CD37 is a tetrapeptide leukocyte-specific surface antigen expressed on mature normal and transformed B cells.

CD37 also has a regulatory role in T cell proliferation. CTCL and PTCL are T-cell malignancies in which CD37 expression has been detected.

The in vitro evaluation of this study involved cell lines such as Hut78 and Fedp, as well as cell samples derived from PTCL patients, all of which had varying levels of CD37 expression.

However, the study also pointed out that since not all PTCL cell lines or patient-derived samples are CD37+, screening for the expression of this antigen may be required in future preclinical and clinical studies.

Furthermore, overexpression of this chemokine receptor has been detected in malignant T cells from patients with ATLL, PTCL and CTCL, including mycosis fungoides ( MF ) and Sézary syndrome ( SS ).

In addition, tumoricidal activity was also demonstrated in a xenograft model of adult T-cell leukemia.

However, CCR4 expression on normal T cell subsets may lead to unexpected toxicity, which may require further in-depth evaluation.

In contrast, the entire population of malignant T cells will express only TRBC1 or TRBC2. Thus targeting TRBC1 ( in the case of TRBC1-expressing T-cell malignancies ) or targeting TRBC2 ( in the case of TRBC2-expressing T-cell malignancies ) can eliminate tumor T cells and partially normal T cells expressing the constant region of the target beta chain , but did not produce any tumoricidal effect on most normal T cells.

T cell aplasia and its solutions

Therefore, prevention of such adverse events is essential for successful CAR-T therapy in patients with T-cell malignancies.

The occurrence of T-cell aplasia can be prevented by various strategies.

One strategy is to select target antigens, and targeting antigens that are missing on normal T cells or expressed on a subset of T cells may leave at least a certain percentage of normal T cells intact during CAR-T therapy.

Another strategy is to use CAR-T with limited or controllable lifespan or activity, whose limited antitumor effect helps prevent the development of T-cell aplastic anemia. 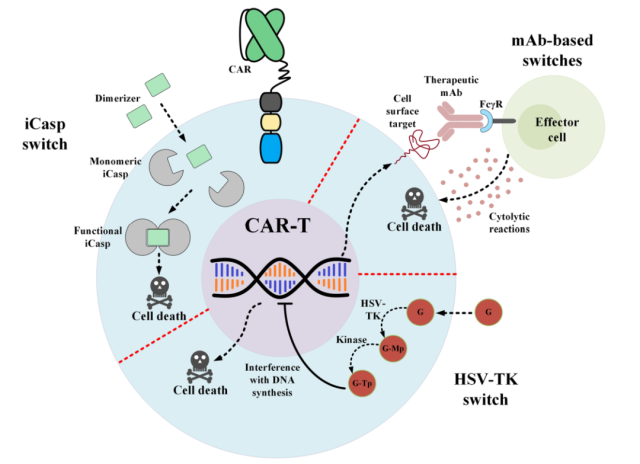 Another applicable strategy to prevent T-cell aplasia is to equip CARTs with a safety switch (also known as a suicide switch) that enables them to control adoptively transferred T cells when administered to a patient.

Currently, multiple research teams are currently investigating the applicability of these safety switches in clinical settings ( NCT02028455, NCT03016377 or NCT01815749 ).

The use of viral vector transduction to generate CAR-T enables stable expression of CAR in transduced T cells.

These transduced T cells can expand in vivo while maintaining CAR expression, and this open duration of CAR expression may lead to targeted non-tumor toxicities such as T cell aplasia.

Two clinical trials ( NCT02277522 and NCT02624258 ) investigated non-viral mRNA electroporation of CD19-targeted CAR T in patients with R/R HL. During these trials, no signs of reactions and serious toxicity were observed, according to the report.

Considering that this approach may help reduce the on-target non-tumor toxicity of CAR-T therapy in patients with T-cell malignancies, it is speculated that continuous CAR-T administration may be required to obtain stable and reliable anti-tumor responses.

Contamination of malignant T cells and their solutions

Since both normal and malignant T cells are isolated during T cell isolation, it is challenging to generate autologous T cells from patients with T cell malignancies.

Autologous CAR-T is more likely to occur in patients with T-cell malignancies, especially those with T-cell leukemia with a high number of circulating malignant T cells .

In this context, generation of allogeneic CAR-T from healthy third-party donors may be considered an appropriate solution.

However, allogeneic CAR-Ts also have their problems, for example, they may mediate life-threatening GvHD, and they may be rapidly attacked and eliminated by the host’s immune system. Both of these obstacles significantly impair the tumoricidal activity of CAR-Ts.

In this regard, researchers have developed allogeneic CAR-T to address the aforementioned limitations using various strategies. Importantly, compared with autologous CAR-Ts, allogeneic CAR-Ts have shorter in vivo persistence after infusion into patients, a property that helps prevent T-cell aplasia.

Alpha- and beta-knockout allogeneic CAR-T targeting CS1 and CD22 are currently under clinical investigation for the treatment of MM ( NCT04142619 ) and B-ALL ( NCT04150497 ), respectively.

The use of these approaches facilitates the generation of off-the-shelf allogeneic CAR-Ts that can be safely used clinically for the treatment of patients with T-cell malignancies.

Another strategy is to use multivirus-specific T ( multiVST ) cells as effector cells for CAR expression.

These cells are genetically engineered to lack expression of the CAR target antigen, making them resistant to cannibalism.

A clinical study ( NCT01570283 ) demonstrated that multiplex VST cells are safe and able to mediate clinical responses in immunocompromised recipients of allografts. Using these T cells may be a suitable method to generate off-the-shelf CAR-T.

γδ T cells make up 1% to 5% of circulating lymphocytes, which are ubiquitous lymphocytes in the skin, reproductive system, and gut.

This property of γδ T cells is very beneficial in adoptive cell therapy because αβ T cells have difficulty accessing these sites.

In addition, NK cells can be used as reliable effector cells for CAR expression to reduce or eliminate the possibility of cannibalism.

On the other hand, NK-expressing CARs are not as durable as conventional CAR-T, a property that minimizes the possibility of T-cell aplasia.

Most importantly, NK-based CAR-expressing effector cells do not possess TCR and do not cause GvHD.

CAR-T therapy for T-cell malignancies is one of the most complex and challenging areas in cancer immunotherapy.

Compared to CAR-T therapy for B-cell malignancies, this field is fraught with difficulties due to issues of antigen selection, cannibalism, T-cell aplasia, and contamination of malignant T-cells.

However, multiple approaches have been developed to address these issues, including gene editing, and the application of allogeneic CAR-T and CAR-NK will give us the opportunity to make breakthroughs in cell therapy of T-cell malignancies.

Additional preclinical and clinical data are needed to validate the safety and efficacy of these approaches.