Nature: DNA analysis reveals the origin of the Black Death

Nature: DNA analysis reveals the origin of the Black Death.

The Black Death, caused by the bacterium Yersinia pestis , swept across Eurasia from 1346 to 1353 AD, killing up to 60% of the local population according to estimates.

On June 15, 2022, researchers from the University of Tübingen in Germany, the Max Planck Institute for Evolutionary Anthropology and other institutions published a research paper in Nature entitled : The source of the Black Death in fourteenth-century central Eurasia .

The team’s DNA analysis of seven 14th-century Black Death victims suggests that the Black Death may have originated in central Eurasia . 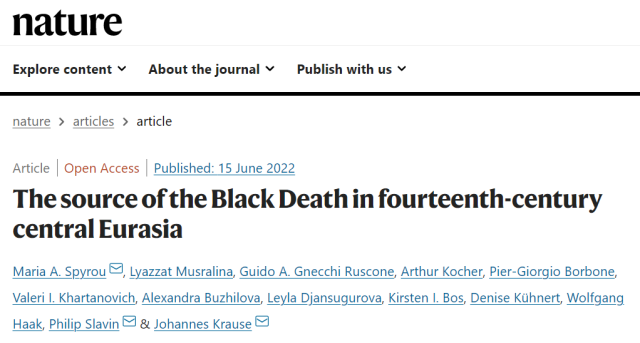 The research team analyzed whether Lake Issyk-Kul, located in present-day Kyrgyzstan, could be the origin of the Black Death pandemic in the 14th century.

Archaeological evidence from nearby cemeteries—the Kara-Djigach and Burana cemeteries in the Chu Valley—shows a marked increase in burials in 1338 and 1339, many of which state the cause of death as ” plague “.

The research team translated and analysed surviving archival data from archaeological excavations at these burial sites and combined this with ancient DNA analyses of the seven individuals buried within them.

The team believes that these Yersinia pestis genomes represent a single strain and the most recent common ancestor of a diversification event widely believed to be linked to the origins of the Black Death .

Comparison with the Yersinia pestis strain currently circulating in the region shows that this ancient strain originated locally.

Based on historical data and artefacts, including tombstone inscriptions and coin hoards, the research team deduced that the region was once home to a rich and diverse community that relied on trade with all of Eurasia.

They believe that this trade exchange may have contributed to the spread of the Black Death in the 14th century.

Nature: DNA analysis reveals the origin of the Black Death