The COVID-19 pandemic is still raging around the world, and the global monkeypox outbreak has once again sounded the alarm for the global public health system.

Monkeypox is a zoonotic disease caused by the monkeypox virus, which causes symptoms similar to, but milder than, smallpox.

In 2003, the United States reported the first human monkeypox case outside Africa. Subsequently, sporadic cases were reported among residents of non-African countries with a history of travel to Africa.

In May 2022, multiple cases of human monkeypox were reported in non-endemic countries such as the United Kingdom, the United States, Portugal, and Spain, and none of these cases had travel history to endemic areas. As the number of cases surged, it caused widespread concern around the world.

Monkeypox virus belongs to the genus Orthopoxvirus in poxviruses. It is a double-stranded DNA virus that is closely related to smallpox virus.

In addition to humans and monkeys, other primates and rodents can be infected with monkeypox. There are two main modes of transmission of monkeypox virus: animal-to-human and human-to-human transmission.

It is generally believed to be transmitted through toxic respiratory droplets during direct, prolonged face-to-face contact. In addition, monkeypox can also be spread through direct contact with an infected person’s bodily fluids or virus-contaminated items such as clothing and bedding.

The incubation period of monkeypox is usually 6 to 16 days, but also 5 to 21 days. The infection can be divided into two stages, the onset stage (0-5 days) and the rash stage (1-3 days after the onset of fever).

Common sites of monkeypox include the face, palms and soles of the feet, and the trunk. Common symptoms caused by infection include fever, severe headache, swollen lymph nodes, back pain, rash, and muscle pain. 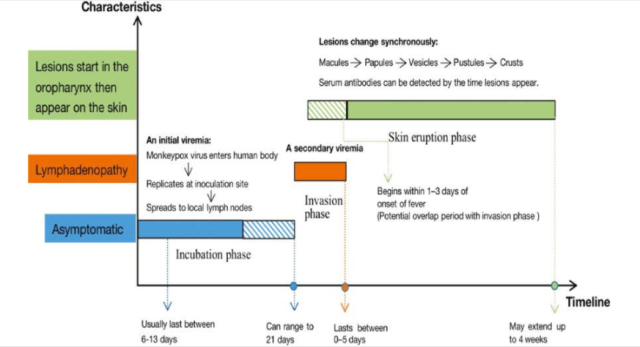 At present, there is no effective treatment for monkeypox, and the main methods for treating monkeypox are nursing and isolating patients.

Previous studies have shown that the smallpox vaccine is about 85% protective against monkeypox infection.

In 2019, the FDA approved Jynneos, a highly attenuated third-generation smallpox vaccine, for the prevention of smallpox and monkeypox in adults.

Considering that the monkeypox virus spread this time is a mild “West African branch” and the virus transmission is relatively weak, the current monkeypox epidemic should have limited impact on the public outside the Africa.

However, it is recommended to reserve vaccinia/smallpox vaccine.  If an epidemic occurs, emergency immunization of special susceptible groups should be carried out.

According to the World Health Organization’s official website on the 27th, as of June 22, 50 countries and regions around the world have reported 3,413 confirmed cases of monkeypox and 1 death.

Monkeypox is a viral zoonotic disease first identified in monkeys in 1958, with symptoms in humans similar to those seen in smallpox patients in the past.

Monkeypox virus is an orthopox virus that is currently known to spread through close direct and droplet contact.

On June 27, researchers published an article in The Lancet, emphasizing that lessons during the COVID-19 pandemic should be learned and that pregnant women should not be excluded from early research on monkeypox vaccines and other treatments, so that pregnant women can benefit early and provide the data needed to determine the safety and efficacy of such vaccine therapies.

In the Democratic Republic of Congo, an observational study of 222 symptomatic individuals hospitalized with monkeypox virus reported fetal deaths in three of four pregnant women.

Testing of one of the intrauterine fetal deaths revealed that the fetus was characterized by monkeypox infection, with virological, histological, and serological evidence of vertical transmission, i.e., from parent to child through the placenta, birth canal, or breastfeeding. offspring.

Currently, no vaccine against monkeypox is approved for use in pregnancy, and given the likely small number of pregnant women who have been exposed to and are willing to receive monkeypox vaccine, the authors recommend prospective international registries of pregnant women and other high-risk groups, So that data acquisition can speed up the speed needed to assess safety and efficacy.