On August 12, 2022, researchers from the University of Hawaii published a research paper titled “Over half of known human pathogenic diseases can be aggravated by climate change” online in Nature Climate Change .

The study found that climate hazards are expected to exacerbate 58% of known human pathogenic diseases (218 of 375), accounting for more than half of all human infectious diseases detected since the end of the Roman Empire. 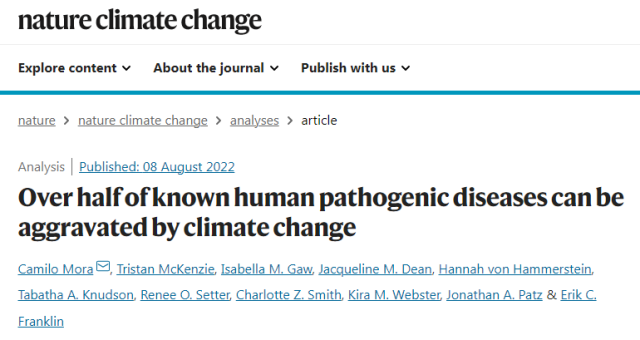 Through a systematic search of more than 70,000 academic papers, the researchers identified 3,213 case reports affected by 10 greenhouse gas emissions-sensitive climate hazards and identified 286 unique pathogenic diseases—among them, 286 277 species were exacerbated by at least one climate hazard. 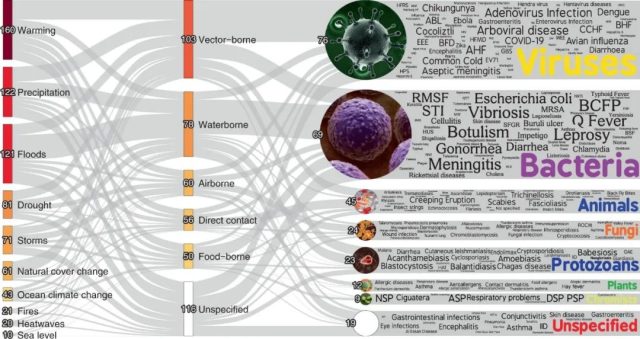 These links are now publicly available on a website established by the researchers. ( https://camilo-mora.github.io/Diseases/ ?)

By exploring how these connections are formed, the researchers further concluded the following findings:

Many climate hazards exacerbate the spatial and temporal expansion of vectors and pathogens, bringing them closer to humans.

For example, warming allows some vectors and pathogens to survive winter, animals expand their range after habitat loss, and so on.

In addition, climate hazards could bring some ancient pathogens back to life, opening a Pandora’s box of infectious diseases.

An incident in Siberia in 2016: When the permafrost thawed due to warming, the carcass of a reindeer that died of anthrax decades ago was unearthed; a child touched it and contracted anthrax, causing the disease outbreak.

Climate hazards can also lead to the movement of people, increasing exposure to pathogens.

Human displacement due to storms, floods and rising sea levels has been associated with an increase in diseases such as leptospirosis, cryptosporidiosis, etc.

For example, climate warming has had a positive impact on mosquito population development, survival, biting rates and virus replication; storms, heavy rainfall and floods that create stagnant water also increase the reproduction of mosquitoes and the range of pathogens they transmit. Heatwaves create natural selection pressure on “heat-resistant” viruses; these viruses spill over into human populations and show greater virulence because they are better able to deal with the body’s main defense, fever.

For example, the inability of the human immune system to adapt to large changes in temperature may be an underlying mechanism for influenza outbreaks.

Readers may be curious: Is climate change related to the COVID-19?

This idea coincides with researchers. They initially explored the link between COVID-19 and climate hazards by searching for cases.

The results found: For the COVID-19, extreme weather exacerbates it and mitigates it at the same time. In some cases, extreme heat in poor areas has brought people together to cool off and be exposed to disease; but in other cases, heavy rains have reduced the spread of COVID as people stay home and indoors away from others.

“I don’t know if we can attribute COVID to climate change, but we can say for sure,” Renee Setter, a doctoral student in the Department of Geology and Environment at the University of Hawaii at Manoa, explained in an interview with Courthouse News, one of the authors. , there has been an increase in diseases due to some of these climate hazards, and as these climate hazards increase, we may see more of these diseases in the future.

To sum up, this study well illustrates the huge impact of climate change on human pathogens, and undoubtedly raises a warning: reducing greenhouse gas emissions and slowing global warming has become an imminent challenge for all mankind.