Nature: The incidence of various cancers has a younger trend

Nature: The incidence of various cancers has a younger trend.

Cancer is the second leading cause of death in the world after cardiovascular diseases.

Epidemiological studies have shown that cancers in the breast, colorectum, endometrium, esophagus, extrahepatic bile duct, gallbladder, head and neck, kidney, liver, bone marrow, Among pancreatic, prostate, stomach, and thyroid tumors, the proportion of early-onset cases (age of onset < 50 years old) continues to increase, and even for cancers such as prostate cancer, whose overall incidence has stabilized, its incidence in young people remains the same in an upward trend.

Several retrospective studies at home and abroad have confirmed that in the past few decades, more and more young people have been diagnosed with cancer. This is of course partly due to the improvement of people’s health awareness and the improvement of detection methods, but industrialization has brought us The real behind the scenes are the eating habits, lifestyle, occupational dangers, etc.

In fact, behavioral risk factors (such as smoking, alcohol consumption, unsafe sex, and dietary risk) have been shown to be responsible for or aggravate the vast majority of cancer burdens and contribute to younger cancers.

Therefore, clarifying the molecular mechanism of behavioral risk factors inducing cancer will be a new topic for researchers, but prevention is always better than prevention, and we do not want to get cancer at a young age, so what aspects should we prevent?

Recently, Nature Reviews Clinical Oncology published a major review, which summarizes the relevant characteristics and possible risk factors of cancer types with increased early incidence in the past few decades.

Among them, obesity is a high-risk factor for almost all early-onset cancers, and smoking and drinking are also the causes of various cancers. This once again sounded the alarm for us. Healthy living habits are the key to preventing cancer. First step! 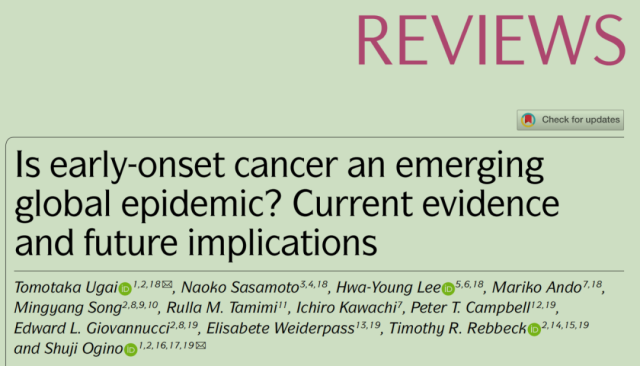 Risk factors, of which obesity and alcohol consumption were significantly associated with early-onset cases, and a meta-analysis published in 2019 also found that regular higher-intensity physical activity was inversely associated with premenopausal breast cancer risk.

Unexpectedly, most premenopausal breast cancers are sporadic and only a few are hereditary, as in one study, BRCA1 or BRCA2 was found in only 12% of breast cancer patients ≤40 years of age.

However, the incidence of early-onset breast cancer is increasing year by year, which reminds us to pay more attention to the relationship between poor living habits and breast cancer.

Several randomized controlled trials have shown that exercise and dietary interventions can alter levels of leptin, insulin, and estrogen in the body, which can affect breast cancer, but, in obese people who do not lose their own weight at the same time, dietary or exercise interventions alone may have significant effects on obesity-related biological effects.

The effect of markers was small, suggesting the importance of maintaining normal body weight.

The occurrence of gastric cancer is closely related to a variety of adverse life factors: high-salt diet, pickled food, smoking, drinking and other factors, Helicobacter pylori (Hp) infection will increase the risk of gastric cancer by 2 to 6 times, and HP infection is associated with early cancer.

Therefore, in order to prevent stomach cancer, each of us should pay attention to developing good living and eating habits, not smoking and drinking, eating less pickles, fried, processed meat, smoked and pickled foods, and more fresh foods rich in vitamin C Fruits and vegetables, for those with a history of digestive tract tumors or ulcers at home, it is also necessary to do gastric cancer screening every two years to eradicate Hp infection in time.

A Western-style diet is a high-risk factor for early colorectal cancer.

It refers to a diet with a high content of carbohydrates, saturated fatty acids, and animal protein.

A study by Harvard University found that a Western-style diet can prevent carcinogenic pks + Escherichia coli to increase the risk of colorectal cancer, linking Western-style diets to specific cancer-causing bacteria for the first time.

Pancreatic cancer is recognized by the medical community as the “king of cancers”, with a 5-year survival rate of less than 10%. The risk factors of pancreatic cancer mainly include smoking, obesity, diabetes, chronic pancreatitis, excessive drinking, long-term exposure to harmful chemicals, etc.

Therefore, it is recommended that high-risk groups change their living habits, eat a reasonable diet, exercise properly, maintain a normal posture, pay special attention to abnormal changes in the body, identify them early, and actively diagnose and treat them.

It is worth noting that due to the failure to implement prostate cancer screening strategies well in some countries, prostate cancer is often found in the middle and late stages, and the five-year survival rate of patients is only 69.2%.

In developed countries, such as Japan, early screening is more popular. , the 5-year survival rate of prostate cancer patients has reached 93.0%.

Thyroid cancer patients tend to be diagnosed at a younger age than most other malignancies, and women tend to have higher rates of thyroid cancer than men, showing differences from adolescence (ages 10–14) and thereafter until middle age period (ages 15–44) is more pronounced.

Thyroid cancer is already the fifth leading new cancer in women worldwide and the second most common cancer among women under the age of 40.

This particular age and gender pattern has led researchers to focus on specific hormone exposures and key time windows of exposure.

Studies have found that estrogen itself may be a carcinogen, which can promote the occurrence of thyroid cancer.

At the same time, estrogen can also enhance the migration ability of thyroid cancer cells and promote thyroid cancer metastasis. The human endocrine system is complex and delicate.

Maintaining a good lifestyle, exercise and eating habits from puberty, avoiding the use of estrogen drugs and irritating cosmetics may reduce the risk of thyroid cancer in women.

A research team conducted a case-control analysis based on medical databases in four Nordic countries to assess the association of maternal medical history, pregnancy complications, and birth characteristics with the risk of thyroid cancer in offspring.

Increased risk of thyroid cancer in offspring. Therefore, doing a good job of pre-pregnancy physical examination, monitoring and nursing during pregnancy and perinatal period of pregnant women may reduce the risk of cancer in offspring to a certain extent.

In recent years, immunotherapy has made some patients with endometrial cancer get partial/complete remission, but obese patients have more disordered energy metabolism and flora environment, and the effectiveness of these drugs will also be affected. Therefore, high-risk patients should actively Control your weight.

According to The Lancet, nearly half of cancer deaths worldwide are caused by known risk factors, with smoking, alcohol consumption and high body mass index having the most significant effects.

At the current level of science and technology, we are often helpless to curb the occurrence and development of familial hereditary tumors, and many stubborn diseases whose pathogenesis is still unclear also make us unable to start.

Therefore, we can do our best to lose weight, quit smoking, quit drinking, and eat healthy.

Do we need to hesitate any longer when it is already clear that our behavior can reduce the incidence of some tumors?

Nature: The incidence of various cancers has a younger trend.