Monkeypox is a zoonotic viral disease caused by monkeypox virus ( MPXV ), an orthopoxvirus belonging to the Poxviridae family.

MPXV was first detected in research monkeys shipped from Singapore in 1958, which may be why the disease is known as “monkeypox”.

However, the natural hosts of MPXV are more likely rodents and other small mammals. The orthopoxvirus genus also includes smallpox virus ( VARV ), a human monkeypox with similar symptoms to smallpox, but with a lower mortality rate.

Sporadic cases of human MPXV were first identified in several African countries in the 1970s, but the virus has spread more widely across the continent over the past 20 years. The number of MPXV cases worldwide has increased dramatically since May 2022, leading the World Health Organization ( WHO ) to declare the monkeypox outbreak a global health emergency. 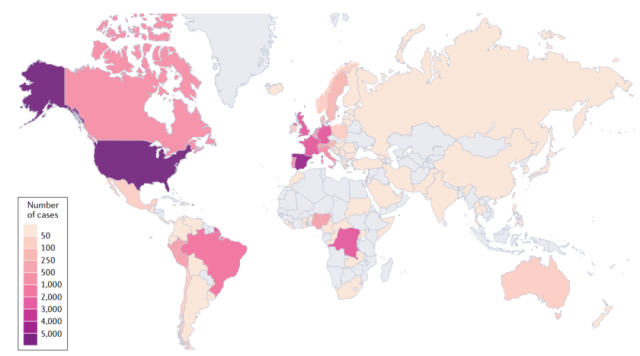 The likely cause of this outbreak can be attributed to the decline in immunity to smallpox in the general population and the termination of the smallpox vaccination program.

The smallpox vaccine has been shown to protect against monkeypox. Let’s take a look at the epidemiology, pathology and treatment of monkeypox.

Epidemiological investigations in the 1970s to identify smallpox residues identified the first cases of monkeypox virus in humans.

Subsequently, a total of 48 confirmed and/or probable cases have been reported in six African countries, including the Democratic Republic of Congo ( DRC ), Cameroon, Liberia, Nigeria, Sierra Leone and Côte d’Ivoire.

Between 1980 and 2000, MPXV was restricted to the African continent, with no reports of infection or transmission in other parts of the world.

Between 2000 and 2020, MPXV spread widely across the African continent, during which time Nigeria reported 181 confirmed and/or probable cases and the DRC reported more than 20,000 probable cases.

The first reported MPXV infection outside Africa was in 2003, when 47 confirmed or probable cases were reported in the United States.

The number of MPXV cases reported in Europe, the Americas, the Middle East and Australia has increased dramatically since May 2022. The current spread of MPXV is unprecedented and the outbreak is expanding every day.

The incubation period for MPXV infection is 5 to 21 days, and common symptoms include fever, headache, and myalgia.

A distinguishing feature of MPXV infection is swelling of the lymph nodes in the upper jaw, neck, or groin.

The rash appears after a fever and starts on the face and involves the tongue and mouth. In the later stages of infection, oral lesions can cause difficulty drinking and eating.

However, in the recent outbreak, some atypical clinical observations have been reported. In homosexual patients, it may also include genital damage, which can then spread to other parts of the body.

The lesions usually go through four stages—macular, papule, vesicle, and pustule—and then crust over and fall off.

Once the lesions have crusted over, the patient is usually considered non-infectious.

Notably, however, viable VARVs have been isolated from scabs in some patients, suggesting the possible presence of infectious viral material.

During pregnancy, MPXV can be transmitted vertically from the mother to the fetus. In a study involving four pregnant women in the Democratic Republic of Congo infected with MPXV, only one pregnant woman gave birth to a healthy baby.

This difference may be due to differences in immune responses.

The clinical outcome of orthopoxvirus infection in vertebrate hosts depends largely on the route of entry of the virus’s primary infection.

For several orthopoxviruses, such as the highly contagious VARV and MPXV , inhalation by inhalation / oral inhalation is a common route of entry.

The virus then infects the oral and respiratory mucosa, with the upper, middle, and lower respiratory epithelium being the primary target of primary infection.

This stage of infection is usually asymptomatic, and the virus spreads with the infection of resident immune cells in nearby tissues, which may include antigen-presenting cells such as monocytes, macrophages, B cells, and dendritic cells. 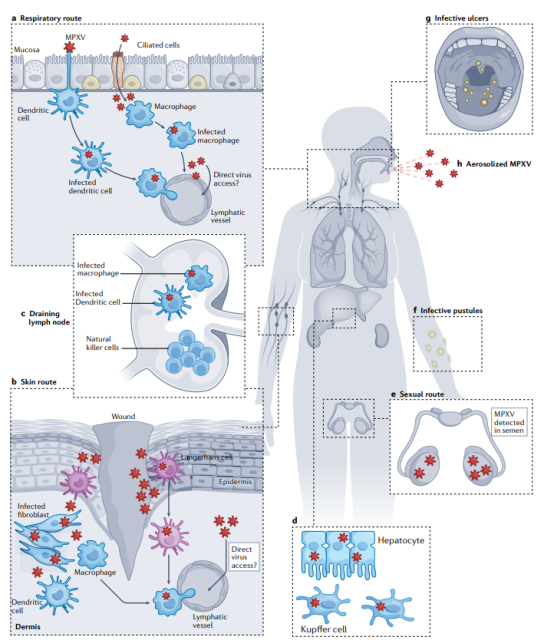 Clinical studies of human monkeypox have shown that lymphoid tissue in the neck and throat is the primary replication zone for MPXV.

The tropism of monkeypox virus in lymphoid tissue is associated with infection of monocytes/macrophages, dendritic cells, B cells and activated T cells, which may also be targets of MPXV.

After lymphoid tissue infection, which may lead to low-grade primary viremia, monkeypox virus can spread to distant organs via the lymphohematopoietic pathway.

In experimental mouse models, the spleen and liver are the main targets of infection after primary lymphatic dissemination.

The presence of orthopoxvirus in small blood vessels in the skin marks the beginning of a skin infection. However, how the virus reaches the upper layers of skin, which lack blood and lymphatic vessels, is unclear.

In addition, infection can also occur through the skin.

In addition, MPXV was recently found in the semen of three male patients in Italy, however this does not suggest that monkeypox has become a sexually transmitted disease, as MPXV can be transmitted through any form of close contact with contagious pustules.

Prevention and treatment of monkeypox

Smallpox vaccines are known to be cross-protective against monkeypox.

The U.S. Food and Drug Administration ( FDA ) has approved two vaccines for the prevention of orthopoxviruses, including monkeypox: the second-generation VACV live vaccine ACAM2000 and the modified Ankara vaccinia ( MVA )-based attenuated third-generation vaccine JYNNEOS .

Protection is strongest if vaccinated immediately after exposure and decreases with time post-exposure, with most studies showing that vaccination within 3 days of exposure provides significant clinical benefit.

Compared with earlier vaccines, third-generation attenuated vaccines ( such as JYNNEOS ) have a better safety profile.

However, because JYNNOOS is given in two injections 28 days apart, the second injection may be too late to help prevent disease in the post-exposure setting, and it is unclear whether the first injection is sufficient to achieve therapeutic effect.

Some treatments developed for smallpox are also available for monkeypox, but their efficacy against monkeypox is based on preclinical evidence with little clinical supporting data in humans.

The antiviral drug tecovirimat targets the VP37 membrane protein of MPXV to prevent the formation of enveloped viruses that can egress out of cells, thereby blocking viral transmission. tecovirimat effectively reduces monkeypox severity in the NHP model.

It has shown efficacy against monkeypox in prairie dogs and mouse models.

With the increase of monkeypox cases around the world, many people have expressed certain concerns, but in fact monkeypox is a self-limiting disease, and most people can recover on their own after infection.

In addition, because monkeypox has a relatively low transmissibility, it is difficult to cause a large-scale epidemic.

Even if community transmission occurs, isolation can effectively block the transmission path, so everyone only needs to take precautions at ordinary times, monkeypox is completely controllable.