The study found that in the antibody immune response, the chemokine CCL22 promotes a new mechanism for the production of high-affinity antibodies, which provides a potential new target for future improved vaccine development.

Antibodies are an important immune mechanism for the body to resist the invasion of pathogens such as viruses and bacteria. Vaccines that induce protective antibodies are an important weapon to curb the spread of many pathogens, including the new coronavirus. Protective antibodies not only need to specifically recognize the pathogen (antigen), but also need to bind to the antigen tightly (high affinity) to block the pathogen’s invasion of cells and tissues. Antibodies are produced by B cells, but there are only a few B cells that can produce high-affinity antibodies; they occur in the lymphoid tissues called “germinal centers” and are collected from many B cells with different affinities through a Darwinian evolutionary screening process Selected from among them, and then differentiate into plasma cells (B cells that continuously secrete antibodies). This Darwinian evolutionary screening process is called “affinity maturation”.

In the process of affinity maturation, the decisive factor that B cells with different affinities must compete for is the help signal of T cells. Through direct contact with B cells, T cells transmit these help signals that allow B cells to survive and clone proliferation. The higher the affinity of B cells, the more help signals they can get when they come into contact with T cells, the better their survival, the more proliferation, and the easier it is to differentiate into plasma cells.

However, due to various reasons, each contact between T cells and B cells in the germinal center is very short. As a result, even high-affinity B cells need to contact multiple T cells continuously to obtain sufficient help signals to complete the positive direction. filter. There are many B cells and few T cells in the germinal center, and these cells are constantly moving. The probability of effective collisions between high-affinity B cells and T cells directly affects the efficiency of affinity maturation. So, is the encounter of T cells and B cells completely random? The process of affinity maturation can certainly be carried out under completely random encounters, but the efficiency may not be high.

The research team speculates that there may be a mechanism that selectively promotes the collision of T cells and high-affinity B cells, thereby improving the efficiency of antibody affinity maturation. Interestingly, if this hypothesis is true, a direct theoretical derivation is that T cells should obtain information about the affinity of B cells before they collide with B cells. However, this deduced prediction is counterintuitive, because T cells can only “learn” the affinity of B cells by experiencing the amount of antigen presented by B cells after they are in contact with B cells.

The immune system uses protein signaling molecules called chemokines to control the directional movement of lymphocytes, thereby achieving cell recruitment. The researchers of the Qi Hai group therefore speculate that perhaps high-affinity B cells may express a certain chemokine through a certain mechanism to enhance the ability to recruit T cells; in this way, it is possible for T cells to sense and chemoat at a distance. Selectively chase high-affinity B cells to facilitate efficient screening of plasma cells that secrete high-affinity antibodies.

To test this hypothesis, the researchers first screened all chemokines and found that germinal center B cells significantly up-regulate the expression of chemokine CCL22 after receiving T cell help signals. T cells in the germinal center express CCR4, the receptor for CCL22. Through two-photon intravital microscopy imaging technology, researchers found that whether it is the absence of CCR4 in T cells or the absence of CCL22 and CCL17 in B cells (the sister chemokine of CCL22, which also acts on CCR4), the collision probability of T and B cells is obvious. Decrease, indicating that chemotaxis indeed promotes the interaction between cells in the germinal center. Furthermore, by comparing the expression of chemokines of different affinity B cells and analyzing CCL22 gene reporter mice, the researchers confirmed that high-affinity B cells in the germinal center express more CCL22, and CCL22 can also indicate high-affinity B cells. In the body, allowing B cells to receive more help signals from T cells in a short period of time can quickly increase the expression of CCL22; if the help signals from T cells are blocked quickly, the expression of CCL22 can be quickly reduced. It can be seen from this that CCL22 is a factor that is affinity-coupled with B cell antibodies. As a marker, it can transmit B cell affinity information to distant T cells. At the same time, it also establishes a positive feedback loop with T cell help signals. This positive feedback between cells allows T cells to patronize more high-affinity B cells, which makes it easier to obtain more help signals, and more help signals make these high-affinity cells express more CCL22 and further recruit T cells ( Diagram). 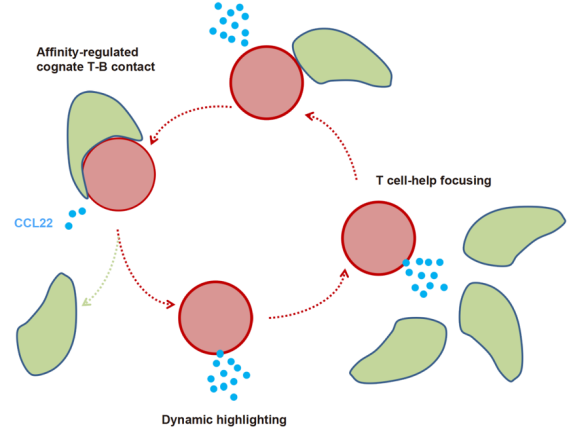 1. When all B cells cannot produce chemokines CCL22 and CCL17, the process of affinity maturation will slow down;

2. If forced to compete and be screened in the same germinal center with wild-type cells, B cells that cannot express CCL22 and CCL17 will suffer from stronger selective pressure due to their lack of ability to recruit T cells to help, and cannot effectively participate in the production of secreted antibodies The process of plasma cells.

Based on this, the research team revealed a new mechanism that promotes the maturation of germinal center antibody affinity mediated by the chemokine CCL22. Using the principle that secreted chemokines can act at a certain distance, the immune system cleverly transforms the affinity information that can only be transmitted through direct contact with T and B cells into information that can be obtained at a certain distance. This will more effectively focus the limited T cell help to the B cells whose affinity is most likely to increase, and promote the affinity maturation. Revealing this new mechanism may provide new ideas for antibody vaccine design.