The types and related characteristics of various anemias

Anemia: The red blood cell count, hemoglobin amount and hematocrit in a certain volume of circulating blood are all lower than normal standards. Among them, hemoglobin is the most important, adult males are less than 120g/L (12.0g/dl), and adult women are less than 110g/L (11.0/dl), which is generally considered anemia.

Iron-deficiency anemia is the most common type of anemia, which mostly occurs in young children, pregnant and lactating women, chronic blood loss and gastrointestinal absorption dysfunction. 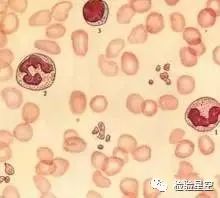 Bone marrow picture: Because the red bone marrow pathology of aplastic anemia is extensive and replaced by adipose tissue, it is not easy to obtain bone marrow components during puncture, and the fat droplets on the smear are obviously increased. Therefore, it often requires multiple and multi-site punctures to be diagnosed.

The main characteristics are: bone marrow hyperplasia is mostly severely reduced. Both the granulocyte and red lines were severely reduced. The granulocyte line was mainly mature granulocytes, and the red blood cell line was mainly medium and late young red. The staining of cell morphology was roughly normal. The lymphocytes are relatively increased. Plasma cells, reticulocytes, basophils and other non-hematopoietic cells increase, and those that appear in piles are “non-hematopoietic cell clusters.” Megakaryocytes are significantly reduced, and most of them do not see megakaryocytes except occasionally in some cases. There was no obvious change in the morphology and staining of mature red blood cells.

Blood picture: Red blood cells, hemoglobin, white blood cells and platelets are moderately or severely reduced, mostly normal cells, orthochromic anemia. Leukopenia, the degree of neutropenia is not as good as the acute type, and the lymphocytes are relatively increased. Thrombocytopenia, and abnormal morphology can be seen, such as small size, irregular shape, and decreased intracytoplasmic granules. The absolute value of reticulocytes is still lower than normal.

Bone marrow picture: Chronic aplastic anemia is due to concentric damage to the bone marrow and modern compensatory hematopoietic foci. Therefore, the puncture findings are not consistent, and multiple and multi-site punctures are needed for diagnosis.

Main features: Bone marrow is mostly dysplasia, and when compensatory hematopoietic foci occurs, it can show that the hyperplasia is active or even obviously active. The total percentage of granulocytes is normal or decreased. Lymphocytes are relatively increased, but non-hematopoietic cells are less than acute aplastic anemia. Megakaryocytes are significantly reduced, even when bone marrow hyperplasia is good, megakaryocytes are also reduced, so this point is one of the very important conditions for the diagnosis of aplastic anemia. Morphological staining of mature red blood cells was roughly normal.

Bone marrow appearance: Bone marrow hyperplasia is obviously active. The red blood cell line proliferates significantly, the primitive and early young red blood cells increase, but the middle and late young red blood cells are still the main increase, and the cell morphology staining is not abnormal. The total percentage of granulocytes can be relatively reduced, but the proportion of each stage and the staining of cell morphology are generally normal. The ratio of grain to red is significantly reduced or even inverted. Megakaryocytes are normal or increased. The morphological changes of mature red blood cells were the same as those of peripheral blood. 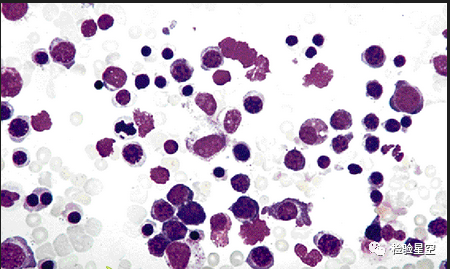 Blood picture: It is large cell orthochromic anemia (MCV>100fl), and the blood picture often shows pancytopenia. Neutrophils and platelets can be reduced, but it is less severe than anemia. Most of the large oval red blood cells can be seen in the blood smear, and the neutrophils have too many lobes, and there may be five or more lobes. Occasionally, huge platelets can be seen. The reticulocyte count is normal or slightly increased. 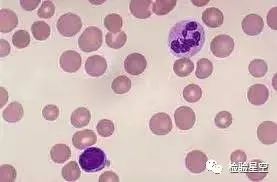 Bone marrow phenomenon: the bone marrow is proliferating actively, and the red blood cell line proliferation is significantly increased. All cell lines have megaloblasts, and the red blood cell line is the most significant. The cells of each stage of the erythroid are larger than normal, the cytoplasm is more mature than the nucleus, and the nuclear chromatin is scattered and concentrated. Similar morphological changes can be seen in granulocytes and megakaryocyte cell lines, especially in late immature and rod-shaped granulocytes. The morphological changes of mature red blood cells were the same as those of peripheral blood.