India Coronavirus break out: The “triple mutation” was discovered for the first time

India break out: The “triple mutation” was discovered for the first time.  India has recently raised a mutated strain with a worrying rate of evolution.

In late last month, the mutated strain in India was slaughtered in the foreign media epidemic section with a “double mutation”. Only a month later, it has become a “double mutation”. Triple mutation”… After preliminary analysis by virus researchers from various countries, it has the characteristics of Brazil, South Africa and the United Kingdom. It is really suffocating in multiple senses…

On April 21st, local media in India reported on the “triple mutation” strain

What happened to the mutant strain? How powerful is it?

So far, South Africa, Brazil, and the United Kingdom have received the most attention. The top journals The Lancet, JAMA, NEJM, BMJ, Science… all of which have received the most attention have been anxiously written for them. Among them, the South African mutant has The higher immune escape ability, which can cause repeated infections in recovered patients and reduce the effectiveness of vaccines, has attracted more attention.

Let me talk about the important point first, what is the outcome of vaccines and their battles. The picture below shows the performance of the three variants released by NEJM in the face of various vaccines. B.1.1.7 is the British variant, P.1 is the Brazilian variant, and 501Y.V2 is the most troublesome South African variant.

It can be seen that the only result of “complete immune escape” is it, and even if there is no complete immune escape, its ability to reduce the efficacy of vaccine neutralizing antibodies is significantly higher than that of the British mutant and the Brazilian mutant.

At present, it seems that the British variant strain is the weakest in reducing the effectiveness of neutralizing antibodies. 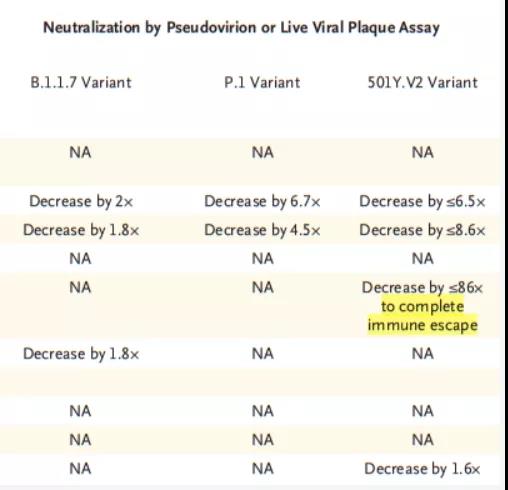 The attention that the South African mutant has received is indeed based on “strength”-statistics found that it has achieved up to 40% of complete immune escape in the plasma of recovered patients, that is, it has a 40% chance of re-infection and already infected and People with neutralizing antibodies. Before that, its “efficient” and “death” assassins made the local hospitals in South Africa suffer a heavy blow.

501Y.V2 only accounted for 11% of the total number of strains in the first week of October 2020. One month later, in the first week of November 2020, it accounted for 60% of the strains, and one month later Later, this data reached 87%. It quickly swept the place of origin and its neighboring areas, replacing the originally circulating strain, and infecting more people more quickly than the original strain. According to local statistics, 501Y.V2 caused the local COVID-19 to infect The speed has risen by 50%, and at the same time, its lethality is likely to increase-the mortality rate of hospitalized patients has risen by 20%. It can be said that it does not conform to some people’s stereotypes about virus mutations-strong transmission ability means weak lethality, strong lethality means weak transmission ability-on the contrary, it not only has enhanced transmission ability but also increased lethality, but also immune escape manufacturing. Repeated infections. 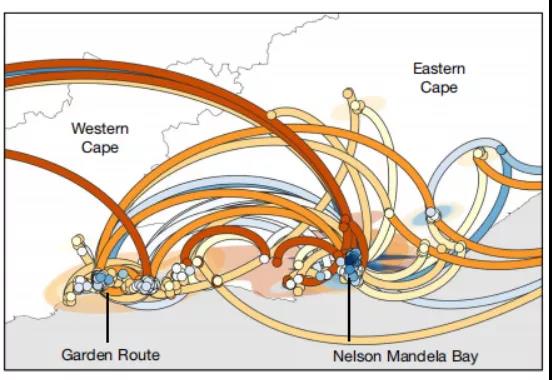 The 501Y.V2 published by Science is a map of the situation sweeping South Africa.  Different colors represent the time. The blue time is earlier and the red time line is later. It can be seen that the area swept by 501Y.V2 is getting larger and larger as time progresses.

The South African mutant is so powerful, but it does not mean that the British mutant and the Brazilian mutant are weak and helpless little “waste”. B.1.1.7 was first reported on December 4, 2020. Since then, it has set a record of 82% increase in infection efficiency in the UK, and has also shown a higher severity and fatality rate than the original epidemic strain in the UK. P.1, which was first reported on January 12, 2021, now also shows an increased infection efficiency and a certain ability to resist neutralizing antibodies. There are observation reports that both P.1 and the Indian variant B.1.617 that rushed to the forefront have a tendency to cause severe and critical illness to become younger.

Obviously, the mutant strain not only affects the vaccine-based epidemic prevention strategy, but also greatly affects clinical countermeasures and hospital resources. NEJM mentioned in the article that there is no evidence to prove that the effect of antiviral drugs on the mutant strain has changed. However, it can be determined that the use of plasma and monoclonal antibodies from recovered patients to treat infected patients with variant strains will affect the therapeutic effect.

The existing mutations in Britain, Brazil and South Africa have caused headaches for epidemic prevention workers and doctors. What will the new Indian mutant B.1.617 look like? India’s explosive daily additions and overwhelming various emergency may have a lot to do with it…

The following chart shows the changes in the proportions of various strains in India in recent months. B.1.617 has rapidly occupied the “market share” in the near future, which coincides with the recent outbreak of the epidemic in India from the timeline. 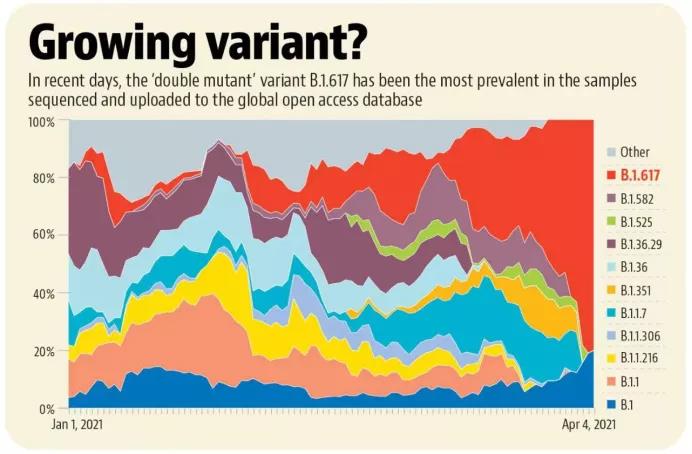 However, Indian researchers have also raised some objections. Some researchers believe that India’s current statistics are incomplete, and this percentage of statistics may exaggerate the expansion speed of B.1.617 due to deviations in the basic data.

“Data incompleteness” is also a pain point for global researchers facing B.1.617. The British mutant strain B.1.1.7 has uploaded 384,000 virus sequences, while the more fierce B.1.617 only uploaded 660 sequences, of which Only 298 sequences were uploaded by India, and the others came from British and American researchers…

At present, the preliminary analysis of researchers from various countries believes that:

However, due to the lack of data, it is still uncertain which immune response and antibodies L452R has the ability to escape. Jeremy P Kamil, associate professor of microbiology and immunology at Louisiana State University in the United States, believes, “There is no evidence that it can escape all cellular immunity. And antibodies.”

David Ho, a well-known American virus researcher, recently pointed out in an academic report that the key to victory in the battle between humans and the COVID-19 lies in the race against the speed of the spread of mutant strains, as well as the speed of virus mutation and evolution.

For example, when the vaccine is effective, the virus that can escape from the vaccine has not spread, so that most people can form a real group immunity through the vaccine. The new coronavirus is not transmitted, and it is naturally eliminated or controlled to a very small disease. Control range.

However, if the speed of vaccinations is not fast enough, or other methods can not be adopted to prevent most people from being infected (for example, China’s method of “suffering” the virus is also a way to eliminate the infection), the virus may be infected everywhere. In addition, individuals who carry the virus to spread everywhere have the conditions for the mutated strain to spread widely, and it may further upgrade and evolve in the process of wide spread, and become more difficult to deal with-for example, the current mutated strain has the ability to infect upgrades. The characteristics of lethal escalation and possible immune escape…It is very possible to obtain new characteristics during the spreading process, making vaccine development and clinical treatment more difficult.

This opinion is also the key to preventing future mutations considered by the World Health Organization-cutting off transmission.

As far as individuals are concerned, what we can do to cut off transmission is still the methods we have listened to for more than a year: wash hands frequently, pay attention to social distance, wear masks, do not gather, etc…

Regarding vaccines, the World Health Organization’s opinion is: fight or fight. Although the mutant strain may reduce the effectiveness of the vaccine, most of the existing data prove that the vaccine can reduce the severity of the disease after infection and reduce the mortality rate. The World Health Organization believes that the current situation is urgent and we should try our best to use the tools we have to fight the epidemic. This does not prevent us from improving and upgrading the vaccine at the same time.

The World Health Organization concluded: We are all safe only if everyone is safe. Only when the global epidemic is resolved can each of us get rid of this war against the virus.