UK Health and Safety Agency: Will continue to monitor the situation related to the COVID-19 recombinant strain XE

On April 1st, the British Health and Safety Agency recently released a report saying that the emergence of recombinant strains of the new coronavirus is not uncommon, and there is currently insufficient evidence to draw conclusions about the growth advantage or other characteristics of the recombinant strain XE. The situation will be continuously monitored.

To date, the UK has reported 637 cases of infection with the XE strain, with the earliest sample dated to January 19 this year, the report said.

In addition, 38 cases of infection with the XF strain have been reported in the UK, but no related infections have been identified since mid-February, and there is currently no evidence of community transmission of the strain within the UK. The global database has so far reported 49 cases of XD strain infection, most of them in France and yet to be detected in the UK.

Recombinant strains can arise when a person is infected with two or more mutant strains at the same time, and the genetic material of those strains mixes in the patient’s body, according to the UK’s Health Security Agency.

Recombinant strains are not uncommon, especially when several mutant strains are circulating at the same time, said Susan Hopkins, chief medical adviser to the UK’s Health Security Agency. Several such strains have been identified during the pandemic, and like many others, most recombinant strains die out relatively quickly.

Hopkins noted that, as of now, there is not enough evidence to draw conclusions about the XE strain’s infectivity, severity, or impact on vaccine effectiveness. The Department of Health and Safety will continue to closely monitor the situation.

(Observer Network News) According to the British “Sun” report, 637 cases of the new XE variant of Omicron have been found in the United Kingdom. British scientists said that the variant cases are Omicron BA.1 and BA.2 subtypes. The combination of the strains spreads about 10% faster than the BA.2 variant,

According to a briefing released by the UK Health Security Agency on March 25, the new variant strain XE was first detected in the UK on January 19 this year. Scientists currently don’t have enough evidence to show how the recombinant variant evolved or its specific ability to spread.

The briefing shows that XE infections currently account for less than 1% of the UK’s total cases. 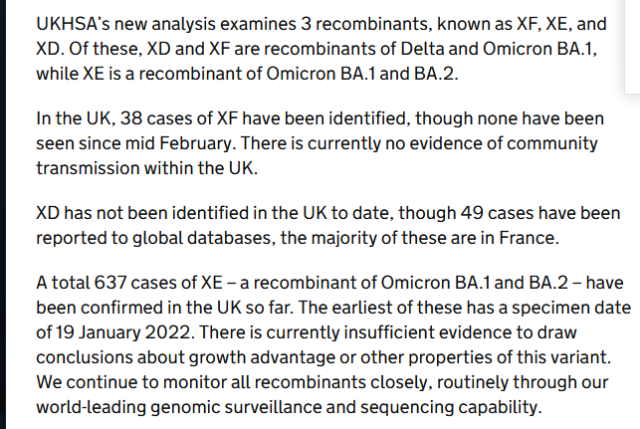 According to the report, although the growth rate of XE’s early infection was not significantly different from the most recent BA.2 variant, the latest data as of March 16 showed that the growth rate of XE was 9.8% higher than that of BA.2. Scientists are still working on this new variant.

“This particular recombinant variant of XE has shown variable growth rates, but we have yet to determine whether it has real growth potential, and there is insufficient evidence of its infectivity, severity, and impact on vaccine effectiveness.” Professor Susan Hopkins, chief medical adviser to the UK Health Security Agency, said. “Recombinant variants are not uncommon, especially when multiple viral variants are circulating at the same time. To date, several binding variants have emerged, but most die out relatively quickly.”

Prominent virologist Tom Peacock said that all of these recombinations, including smaller clusters that have not yet been assigned, should definitely be closely monitored for signs of growth and, where possible, to try to isolate and characterize them. 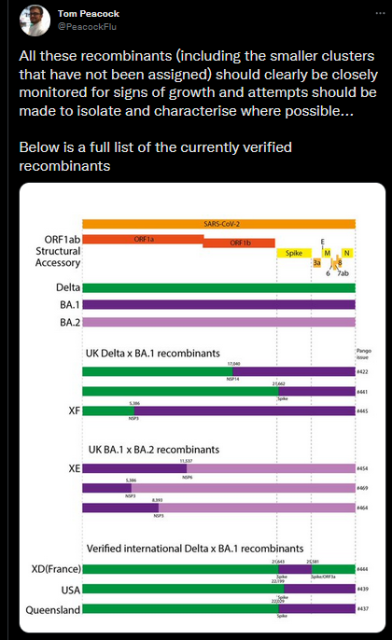 To date, a total of 49 cases of XD have been reported in the global database, most of which have also been found in France, Denmark and Belgium. In the UK, 38 cases of XF have been identified, and since February 15, no new cases of the variant have been reported, and there is no evidence of community transmission of the XF variant within the UK. The UK Health Security Agency said it will continue to closely monitor these variant recombinants through genome sequencing.

According to reports, the recent sharp rise in the infection rate of the COVID-19 in the UK is mainly caused by the rapid spread of the Omicron variant BA.2. Since mid-February, the UK BA.2 infection rate has been around 75% higher than other Omicron variants. Estimates from the U.S. Centers for Disease Control and Prevention (CDC) released Tuesday said U.S. cases of the BA.2 variant have been rising steadily for nearly a month.

As of last week, BA.2 has become the mainstream new coronavirus strain in the United States, accounting for 55% of new cases nationwide.