Based on this, scientists hope to prevent and treat Alzheimer’s disease by inhibiting the production, fibrosis and deposition of β-amyloid. However, the effect is not satisfactory.

The existing drugs can only delay the aggravation of pathological symptoms, but cannot prevent Or reverse the disease process, and it is easy to relapse after stopping the drug.

Knowing a lot of pathological mechanisms, but still unable to get in, we can’t help thinking: Are we really touching the root cause of Alzheimer’s disease, or are we blinded by its appearance, and ultimately cure the symptoms but not the root cause?

Recently, a new study from the Grossman School of Medicine of New York University and the Nathan Klein Institute has subverted our understanding of Alzheimer’s disease “first the formation of extracellular amyloid plaques, and then the death of nerve cells”.

According to the traditional impression, it is proposed that ” neural cells die first, followed by the appearance of extracellular amyloid plaques “.

Thinking about it this way, even if the extracellular amyloid plaques are removed, the victim cells have already died, so what is the remedy?

Autophagy lysosomes are formed by the fusion of autophagic vacuoles and lysosomes.

The assembly line of β-amyloid will stagnate, causing a large number of garbage intermediates to form and accumulate in the lysosome, which also includes beta-amyloid and its precursor proteins.

When the lysosome cannot withstand the rupture, the hydrolase in the lysosome is released into the cytoplasm, decomposes and digests the cell, the cell membrane disintegrates, the intracellular garbage is leaked out, and finally the “extracellular” amyloid we see is formed.

In other words, cell death precedes the formation of extracellular amyloid plaques, and it can even be said that these amyloid plaques are the remains of dead nerve cells mixed with beta amyloid .

So how did the researchers justify their conclusions?

First, they needed to observe, in Alzheimer’s mice, that the acidification of nerve cells’ lysosomes is impaired, and that this process precedes cell death and the formation of extracellular amyloid plaques.

Let’s see how they differentiate between normal and acidification-disordered autophagolysosomes: 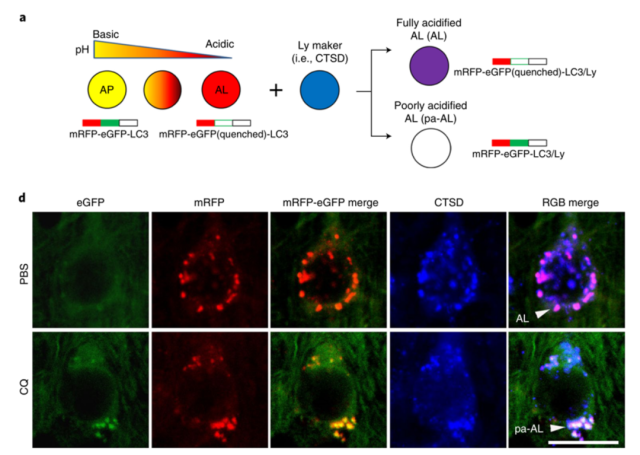 When this probe was applied to model mice of Alzheimer’s disease, the researchers observed that 90% of autophagy-lysosomes in the neocortical region of the mice had acidification disturbances at 5 months after birth.

They appear at least 5 months earlier in the appearance of amyloid plaques in the brain (10-12 months) .

Not only that, these autophagolysosomes are like petals, fused with each other around the nucleus to form a corolla-like structure, which the researchers call PANTHOS (poisonous flower) , and the nerve cells containing poisonous flowers in the body are also called “” Poison Flower Neurons”. 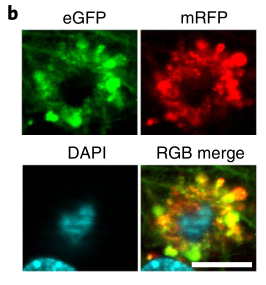 As the disease progresses, in addition to the increase in intracellular beta amyloid, the “poisonous flower neurons” gradually develop towards senile plaques.

If only half of the “poisonous flower neurons” have senile plaques in the brains of 2.2-month-old 5xFAD mice.

Marker-positive, the proportion has exceeded 95% in 6-month-old 5xFAD mice.

Eventually, the nucleus in the center of the poisonous flower disappears, the permeability of the lysosome increases, the enzymes in the lysosome are released into the cytoplasm, the integrity of the nerve cell membrane disappears, the cell is declared dead, and the remains become what we see as “extracellular plaques” , more and more “poison flower neurons” gathered together, and the plaque area further increased.

For the hesitant Alzheimer’s disease treatment, this research is tantamount to “pulling through the clouds and seeing the sun”.

To reduce plaque formation and avoid cell death, the key is to “repair the garbage disposal plant” and restore the acidification function of lysosomes.

In fact, the team’s research published in Science Advances in April this year has demonstrated that by improving lysosomal acidification, it can significantly reduce neural damage in Alzheimer’s mice!

Hopefully this time we are truly on a path to truth and hope.