“Cell Metabolism”: The latest data on global liver cancer is released, and a new carcinogen is on the rise!

According to the latest global cancer burden data in 2020 released by the International Agency for Research on Cancer of the World Health Organization [1].

The main causes of liver cancer in some countries include hepatitis B, hepatitis C, alcohol, NASH, aflatoxin and aristolochic acid.

In addition, the prevalence of NASH in the United States, Europe, and Asia has also risen in tandem with obesity and diabetes, resulting in a marked increase in the incidence of NASH-related liver cancer, however, the latest global-scale statistics are still lacking.

Recently, a research team led by Rohit Loomba of the University of California, San Diego published the latest research results in the famous journal “Cell Metabolism” [5], reporting the incidence of liver cancer in 204 countries and regions from 2010 to 2019. , mortality, disability-adjusted life years (DALYs), and temporal trends in the etiology of liver cancer.

Fig1. Screenshot of the homepage of the paper

The Western Pacific region, including China, is still an area with high incidence and high mortality of liver cancer, and the burden of liver cancer in China is still heavy! 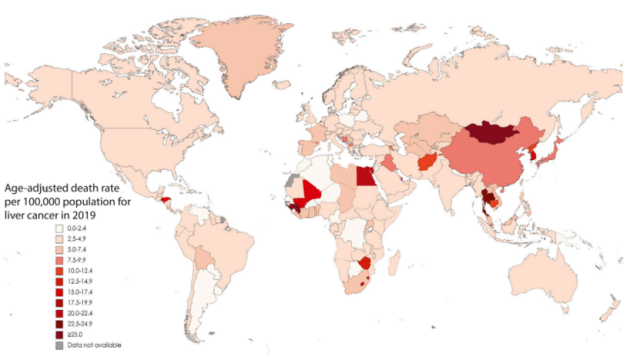 From the perspective of socio-demographic index, new cases of liver cancer (about 190,000), deaths (about 200,000), and disability-adjusted life years (5.5 million) were the highest in medium-SDI countries in 2019 . 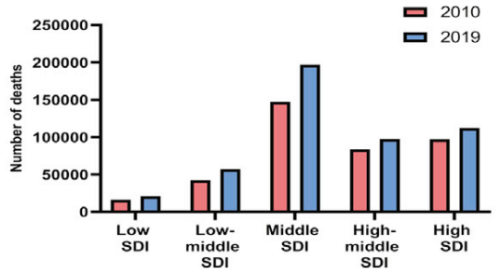 Fig4. Comparison of age-standardized liver cancer mortality in different SDI countries in 2010 and 2019 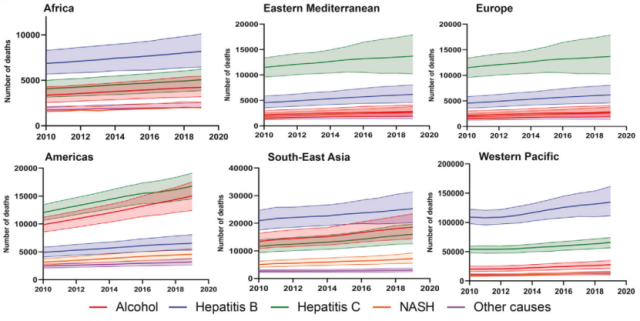 ig6. Changes in the number of deaths from liver cancer caused by different causes in various regions of the world from 2010 to 2019

According to the different etiologies of liver cancer, the researchers also put forward corresponding suggestions.

NASH is the fastest growing cause of liver cancer morbidity and mortality worldwide . Obesity is an important cause of NASH , so the researchers recommend urgent global measures to address underlying metabolic risk factors to reduce the growing burden of NASH-related liver cancer.

Alcohol is the second-growing cause of liver cancer , and researchers believe that policies such as raising alcohol prices and taxes at the national level could be considered to reduce per capita alcohol consumption.

Hepatitis B and C-related liver cancer morbidity and mortality have increased in the Americas Region, which researchers believe may be due to underdiagnosis and lack of awareness of the disease, recommending enhanced control, screening, and treatment of hepatitis B and C infection.

This study statistically analyzed the prevalence of liver cancer from 2010 to 2019 from a global perspective, and found that the global burden of liver cancer was getting heavier. In particular, NASH and alcohol, as two fast-growing etiologies, need attention and intervention.