In the Embryology and Stem Cell Laboratory of the University of Cambridge, a mouse embryo, which has gathered the efforts of the entire laboratory for more than ten years, tells the world another miracle of life.

This embryo is not the result of a sperm-egg meeting, but was artificially grown by Professor Magdalena Zernicka-Goetz’s team using mouse stem cells .

▲Professor Magdalena Zernicka-Goetz of the University of Cambridge, who also works at the California Institute of Technology (Photo credit: Simon Zernicki-Glover)

The use of stem cells to synthesize mouse embryo models is not news in itself.

In 2017, it was the team led by Professor Zernicka-Goetz that cultivated an artificial embryo model with mouse stem cells; just 3 weeks ago, a “Cell” paper reported that not only did not require sperm and egg cells, but even directly in the “artificial uterus” ” mouse embryos grown in .

But what’s special about this latest embryo is that for the first time, a synthetic embryo has a complete brain structure .

Just now, this blockbuster result was published in the top academic journal “Nature”.

The research team points out that the progress not only opens up a new avenue for creating the first steps in life, but also is expected to help understand the genetic mechanisms in embryonic development and artificially synthesize human organs for transplantation.

We know that embryonic stem cells (ESCs) play a key role from the fertilized egg to the birth of new life into the world. This pluripotent, immortal cell can differentiate into almost all cell types in the body.

But to form a complete embryo, only embryonic stem cells are not enough. In addition to the developing embryo itself, two structures that support embryonic development are also indispensable: the placenta is the link between the fetus and the mother, transporting oxygen and nutrients to the fetus; the yolk sac is the initial site of exchange between the mother and the embryo, the yolk sac The blood island formed in the early embryo becomes the hematopoietic site of the early embryo.

Therefore, to artificially create a complete mouse embryo, the joint participation of these three kinds of stem cells is indispensable.

Such embryos cannot form the neural tube, the primitive structure that differentiates into the brain and spinal cord, and naturally do not have a clear brain structure. 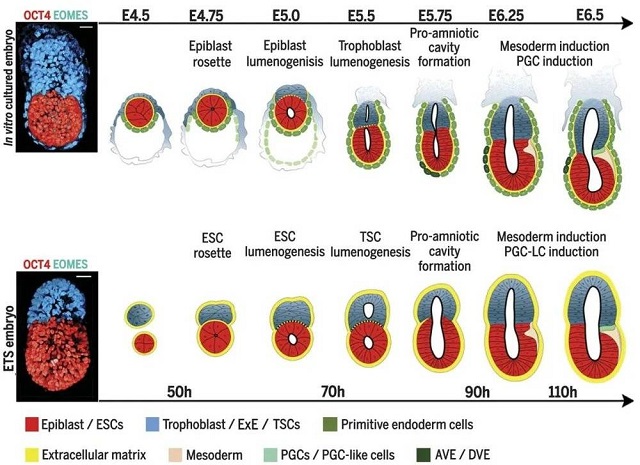 Of course, for scientists, the task is not only to put these three kinds of stem cells together, but also to make them “talk” smoothly.

In fact, a large number of cases of human embryo stoppage occurred in the stage when these three kinds of stem cells transmit mechanical and chemical signals to each other.

“A lot of embryo stops occur at this stage, when people often don’t realize they’re pregnant,” says Professor Zernicka-Goetz. “This stage is the foundation of everything. If you go wrong at this point, the pregnancy will end in failure. .”

Eventually, these stem cells self-organize into embryos and continue to develop until neural tube formation .

At this time, the state of the embryo model is equivalent to the mouse embryo at 8.5 days after fertilization in the natural state. 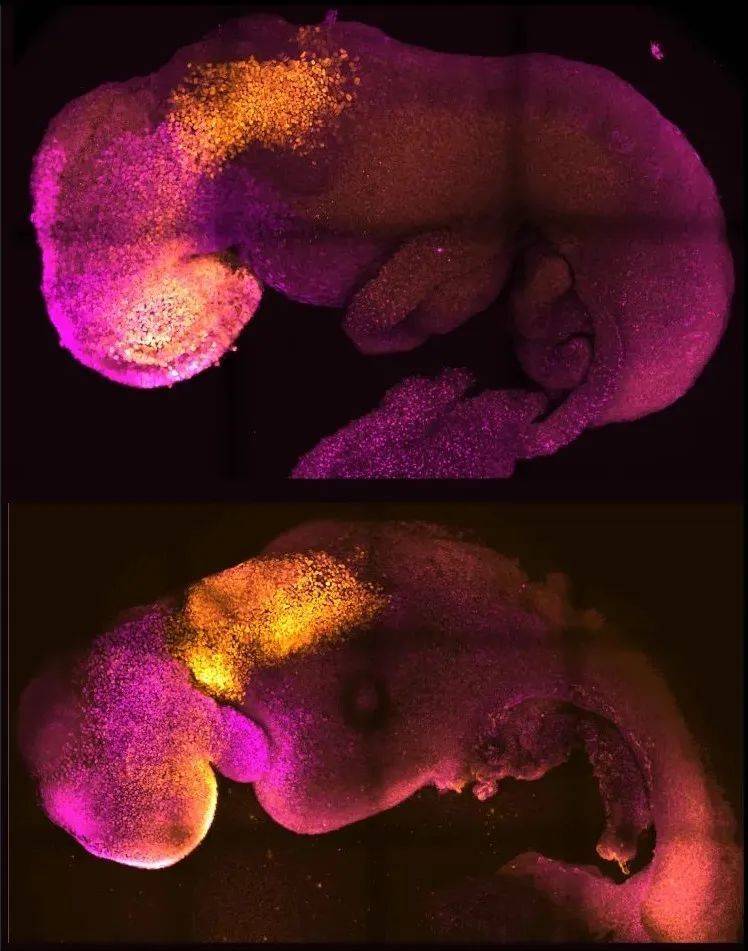 ▲Comparison of natural (top) and synthetic (bottom) mouse embryos, the brain and heart structures of both can be seen (Image source: Amadei and Handford)

What organ structures have been differentiated from the embryonic model at this time?

Under the microscope, the research team observed the neural tube, the continuously beating heart structure, the gut tube, the primordial germ cells, the tail bud region containing the precursor cells of the neuromesoderm… and, most crucially, the ability to distinguish the forebrain from the midbrain The complete brain structure of the region .

Know that the forebrain requires signaling from extraembryonic tissues to develop. Now, for the first time, Zernicka-Goetz’s team has shown the structure of the forebrain in an embryonic model grown from stem cells . 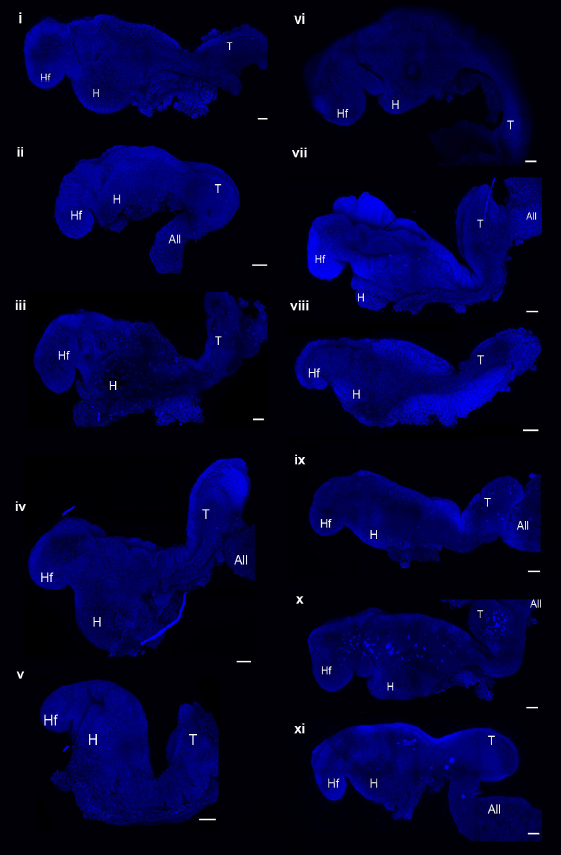 ▲The embryo model successfully developed to the equivalent of the 8th day of the mouse embryo (Image source: Reference [1])

Having a complete structure does not imply the same function as a real embryo. But soon, the next experiment dispelled doubts.

The research team created an embryo model with the Pax6 gene knocked out .

The Pax6 gene is essential for brain and eye development, so embryos with Pax6 mutations show specific brain development defects. Embryos in which Pax6 was knocked out showed a similar pattern of defects.

“Stem cell embryo models are important because they give us access to the early stages of embryonic development.

When tiny embryos implant in the uterus, a hidden period that we cannot see (with traditional methods) .

This accessibility allows us to manipulate genes, to understand their role in the development of model systems,” said Professor Zernicka-Goetz. 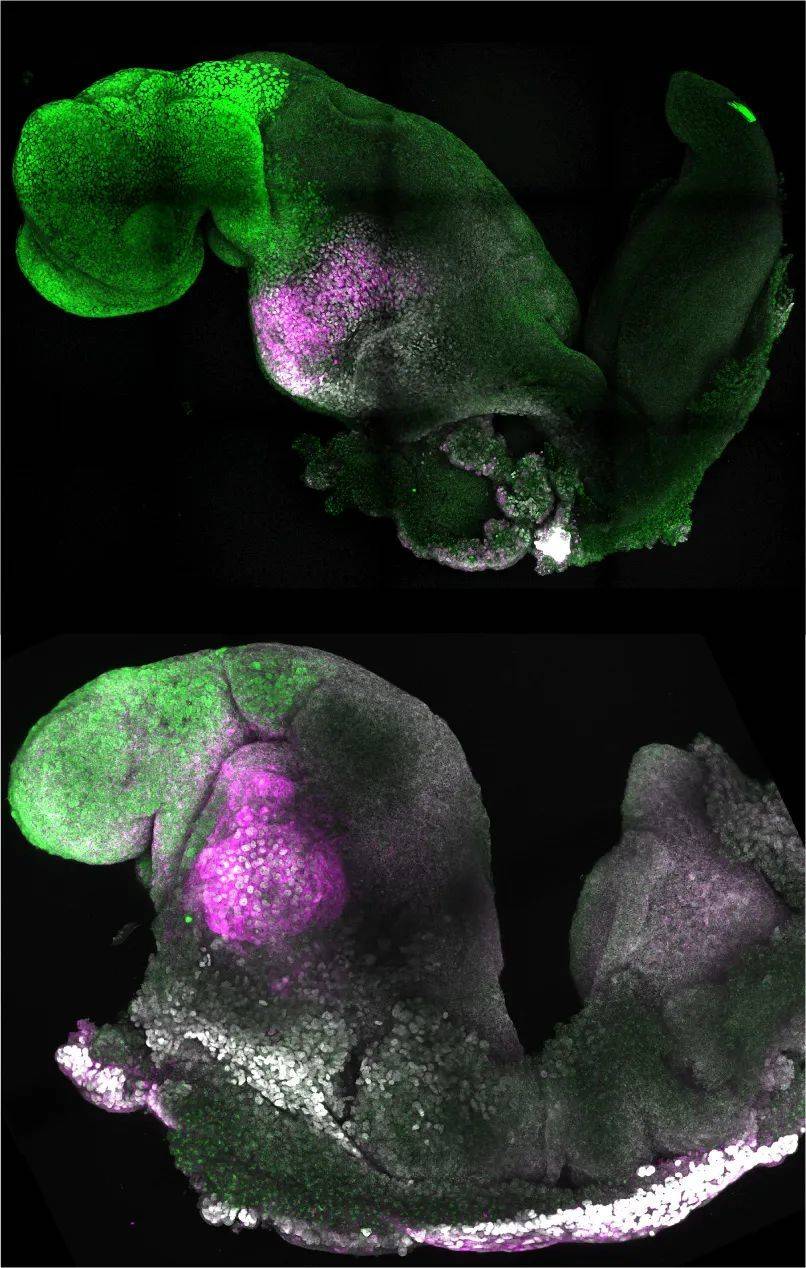 In addition, this model can help researchers understand why some embryos fail to develop smoothly, and guide the artificial synthesis of human organs, providing a new potential source for organ transplantation . Currently, the research team is developing similar human embryo models, which they hope to use to synthesize specific organs.

“There are countless people around the world waiting for organs to be transplanted,” said Professor Zernicka-Goetz, “and the knowledge gained from this work could be used to ‘grow’ human organs, saving countless lives.” The ethical issues that may arise, this breakthrough technology will undoubtedly bring a powerful new weapon to future medical and genetic research.

Regarding the prospect of human embryo models, Professor Alfonso Martinez Arias of Pompeu Fabra University in Spain said that the efficiency and reliability problems in mouse studies must be solved first, so it will take some time to realize.

But “the results of this study suggest that similar experiments will be carried out in human cells in the future; at some point, similar results will appear. So people need to think about the ethical and social implications of these studies before they arrive.” “