When you have a headache, you may not think about your body position while taking your medicine.

However, a recent study by Johns Hopkins University found that your posture can significantly affect how quickly your body absorbs medications by as much as an hour.

These conclusions are based on what is believed to be the first model to replicate how a drug dissolves in the human stomach.

“We were very surprised that posture had such a dramatic effect on the dissolution rate of the tablet,” said senior author Rajat Mittal, an engineer and fluid dynamics expert at Johns Hopkins University. “I never thought about what I was doing right or wrong, but now I have to think about it every time I take my medicine.”

Their findings were recently published in the journal Physics of Fluids .

In recent years, models that accurately represent the work of various vital organs have been developed, most notably the heart.

The team’s model, StomachSim, appears to be one of the first models capable of realistic simulations of the human stomach.

By fusing physics, biomechanics and fluid mechanics, StomachSim simulates what happens in the stomach when it breaks down food or, in this case, medicine. 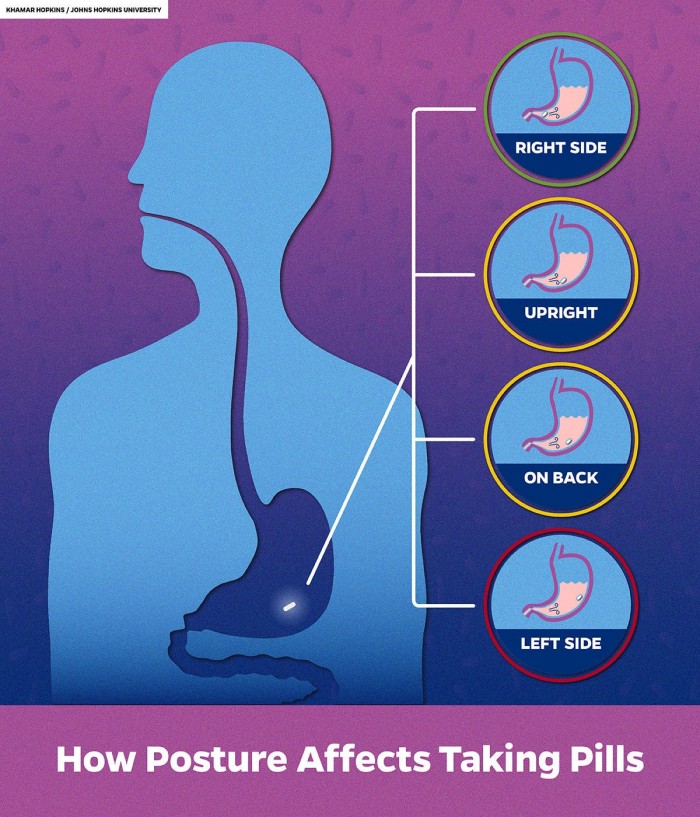 Most pills don’t work until the stomach has moved its contents into the intestines.

So the closer the tablet is to the antrum, the faster it begins to break down and unload its contents into the duodenum, the first part of the small intestine.

If your goal is to target this part of the stomach with pills, your posture is critical to harnessing gravity and the inherent asymmetry of the stomach.

The team tested four poses. Taking the tablet while resting on the right side was by far the most effective, delivering the tablet into the deepest part of the stomach and achieving a 2.3 times faster dissolution rate than the upright position. The worst is to sleep on the left side.

The team was surprised to find that if a tablet dissolved within 10 minutes on the right side, it could take 23 minutes in an upright position and more than 100 minutes when lying down on the left side.

“For older people, sedentary or bedridden people, it can make a huge difference whether they turn left or right,” Mittal said.

The team also considered stomachs that aren’t working at full capacity due to stomach cramps caused by conditions like diabetes and Parkinson’s disease, meaning the dissolution of the pills.

Even a small change in stomach conditions can lead to a major difference in the outcome of oral medications, said lead author Jae Ho “Mike” Lee, a former postdoctoral fellow at Johns Hopkins University.

Stomach disease affects drug dissolution in a similar way to posture — underscoring how much of a difference posture can make. “Posture itself has such a huge impact, it’s the equivalent of someone having a very noticeable dysfunction in their stomach in terms of drug dissolution,” Mittal said.

Future work by the researchers will try to predict how changes in the biomechanics of the stomach affect the body’s absorption of drugs, how food is processed in the stomach, and the effects of posture and stomach cramps on food digestion.