The researchers published their findings in The Lancet Planetary Health .

They found the radioactive element in some drinking water supplies in the United States, especially around Spanish-speaking communities.

The EPA sets a maximum contaminant level for the total amount of uranium in water. The researchers found that between 2000 and 2011, two-thirds of the samples had uranium concentrations that were 2.1 percent higher than the average “allowed” by the EPA. 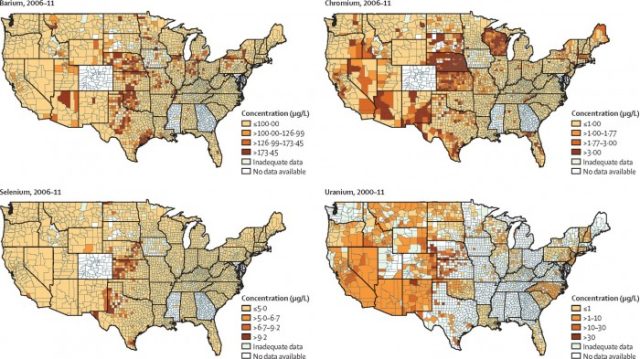 Gizmodo noted that previous research has shown that almost 4 percent of private wells in the U.S. have uranium levels above allowable levels. Still, the new findings are the first to show pollution across the United States. One of the main reasons uranium in water is such a concern is that it may be partly responsible for the higher rates of chronic disease in affected areas.

The researchers found higher concentrations around poorer neighborhoods. In addition to this, researchers have seen higher rates of chronic disease and generally poorer health outcomes in these specific regions.

The hope, the authors say, is that the new study will put pressure on policymakers.

That pressure may help prompt them to make more substantial reforms to protect drinking water from elements such as uranium.

The EPA has some regulations in place, but people need better ways to enforce them.

The researchers created a map of the concentrated areas, which you can see on Columbia University’s website.