This anti-aging medicine has gone astray: Chronic inflammation leads to a decrease in NAD+, and CD38 is the key.

As we all know, ATP is the energy currency in the body, so what is NAD+ ?

NAD+ and its reduced form NADH are important biohydrogen carriers and electron donors in the body, are inseparable from ATP synthesis, and play an important role in maintaining cell growth, differentiation, energy metabolism, and cell protection.

Many studies have shown that supplementation of NAD+ or NAD+ precursor β-nicotinamide mononucleotide (NMN) can significantly reverse the aging of mice and prolong their lifespan.

Although it has not been clinically proven and the price is high, it does not affect the pursuit of immortality by the rich.

Li Ka-shing , Buffett and other rich people not only take NAD+ precursor NMN, but also invest heavily in their R&D and production company ChromaDex.

This has also led to the hot sale of NAD+ -related health products, and has even been called an ” elixir of life “.

Recently, researchers from the Buck Institute for Aging in the United States published a research paper entitled: Senescent cells promote tissue NAD+ decline during ageing via the activation of CD38+ macrophages in the journal Nature Metabolism .

This study found that chronic inflammation is the driving factor leading to reduced NAD+ levels .

As cells age, their metabolic burden increases, and senescent cells lead to NAD+ activation through the activation of CD38 (cyclic ADP ribose hydrolase) , a protein present both inside and on the surface membrane of many immune cells.

“These findings are very exciting,” said Eric Verdin , corresponding author of the paper and director of the Buck Institute . “The fact that NAD+ reduction and chronic inflammation are two phenomena associated with aging and age -related diseases, respectively, provides a better understanding of aging.”

In a comprehensive and more systematic approach, the discovery of CD38 macrophages as mediators of the link between the two provides us with a new target for therapeutic intervention. 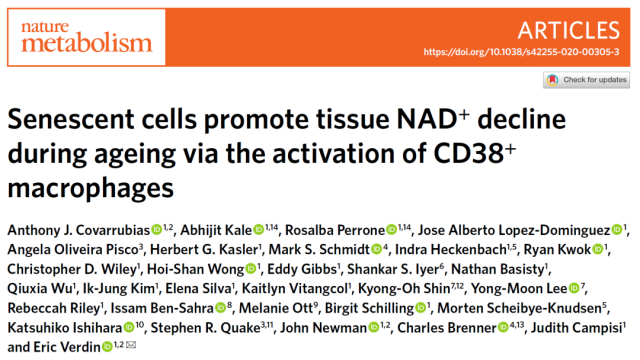 Scientists have long recognized that NAD+ levels decline with age , but it was unclear whether this decline was due to reduced NAD+ production or loss due to metabolic breakdown.

Now, this research shows that, at least in some cases, the reduction in NAD+ is due to metabolic breakdown . 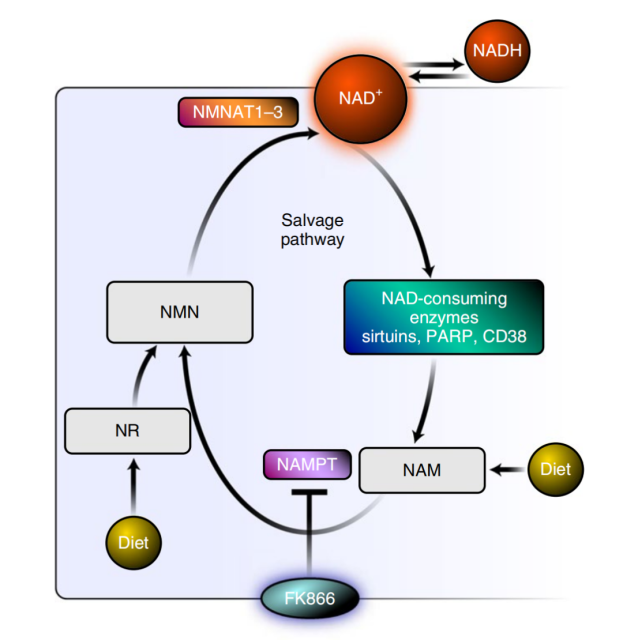 In other words, the level of NAD+ is like a reservoir, and it is now found that the water level of the reservoir is decreasing over time, and this is caused by a leak in the tank. Although adding water may solve the problem to a certain extent, it is ultimately a temporary solution .

Corresponding author Eric Verdin said: “Just filling the tank without addressing the leak will not be enough to solve this problem. Our preliminary data suggest that blocking CD38 activity in aged animals restores NAD+ in specific tissues. level .”

In this study, the researchers found that during aging and acute inflammatory responses, pro-inflammatory M1 macrophages , but not naive or M2 macrophages, accumulated in metabolic tissues , including visceral white adipose tissue and liver .

In addition to this, the researchers also found that senescent cells that stop dividing due to DNA damage secrete large amounts of pro-inflammatory proteins known as the senescence-associated secretory phenotype (SASP) .

Cellular senescence was evolutionarily selected as a protective measure against cancer, but as senescent cells accumulate in tissues, SASP leads to low-grade chronic inflammation, and these inflammatory proteins induce macrophage proliferation, CD38 expression, and NAD+ degradation in SASP . 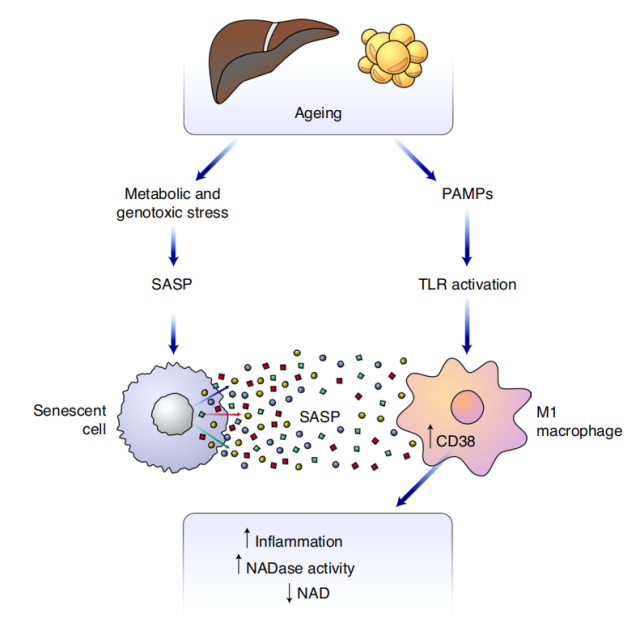 The relationship between NAD+ and energy is like money carts and money. If there are fewer money carts, the whole economy will stop and everything will collapse.

Now this study shows that drugs targeting SASP or CD38 or May provide us with another way to address the decline of NAD+, thereby resisting aging .

In summary, NAD+ is present in every cell and plays an important role in the cellular energy metabolism, and this study shows that chronic inflammation due to the accumulation of senescent cells in tissues as we age is a key cause of NAD+ reduction and will guide the development of new targeted therapies .

It is worth mentioning that there is a similar study in this issue of Nature Metabolism , the article is titled: CD38 ecto-enzyme in immune cells is induced during aging and regulates NAD+ and NMN levels , by Robert and Arlene of Mayo Clinic, USA Completed by a research team led by Eduardo N. Chini of the Kogod Center for Aging Research .

This study also showed that aging-induced inflammation promotes the accumulation of CD38 in immune cells, and CD38 reduces the levels of NMN and NAD+ through exoenzyme activity , further corroborating the research of Eric Verdin et al . 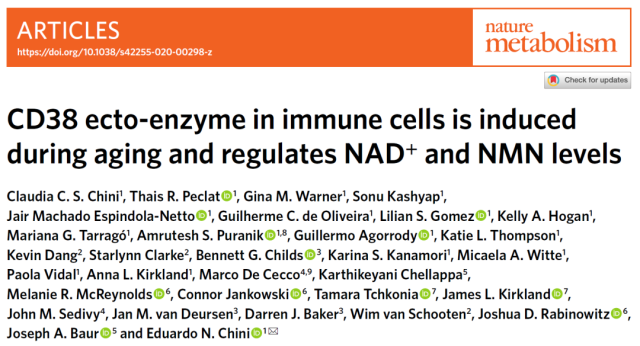 Collectively, both studies suggest that aging-related inflammation induces CD38 expression in macrophages and is responsible for the age-related decline in NAD+ levels .

This also reminds us that methods that have previously focused on restoring or supplementing NAD+ for anti-aging may not be the best choice .

The level of NAD+ is like a reservoir. With the increase of age, the water level of the reservoir continues to drop.

Just adding water without repairing the loopholes is a cure for the symptoms but not the root cause , targeting CD38, thereby inhibiting the decline of NAD+ . , may be a better anti-aging method.